IndusInd Bank Share Plummets By 12% Amidst Accusations Of Evergreening Hits The Bank, Public Reputation In Danger 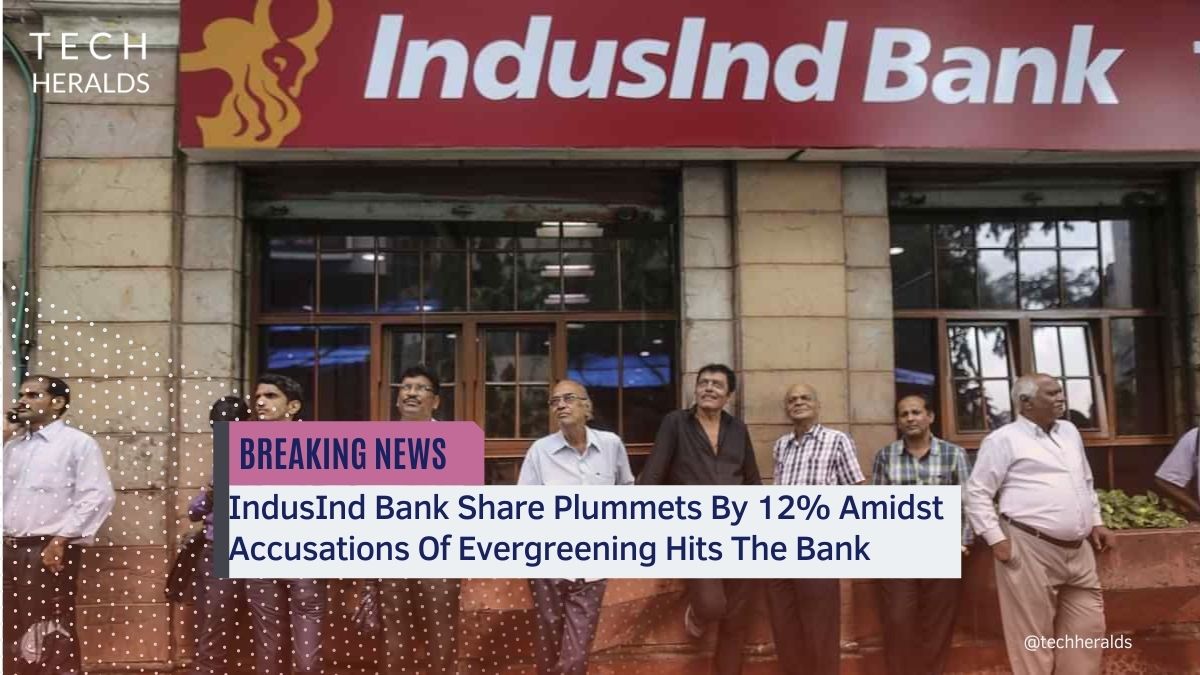 The IndusInd Bank share drastically plummeted as much as12 percent on Monday, given to a report first published in the Economic Times on 5 November 2021. Anonymous whistleblowers accused IndusInd Bank of loan evergreening at its microfinance subsidiary Bharat Financial Inclusion Limited (BFIL) through the Economic Times report. For the uninitiated, evergreening is a practice of sanctioning new loans to the defaulted borrowers to enable them to repay the existing loans.

The storm that caught IndusInd Bank also left its marks on the IndusInd Bank share price. The shares price of the lender bank went down as low as Rs 1,042 apiece and rested on to Rs 1,061 at the closing time of the stock market.

Since the publication of a report on 5 November under the title ‘Whistleblowers Raise Loan Evergreening Issue at IndusInd Arm,’ the reputation of IndusInd Bank has been constantly at stake. The down surge in IndusInd Bank share price has clearly indicated that people have lost the trust over IndusInd Bank. However, the lender bank denied the allegations reported in the Economic Times in a press release.

“All the accusations put on us by anonymous individuals allegedly posing as whistleblowers are entirely baseless and fallacious, said IndusInd Bank while responding to the allegations in a press release. All the loans dispensed and controlled by Bharat Financial Inclusion, including during the Corona pandemic that devastated the rural economy badly not just once but twice, are fully compliant with the regulatory norms, the lender bank asserted.

Bharat Financial Inclusion (BFIL), a microfinance arm of IndusInd Bank, dispenses microloans to women residing in the rural parts of India. The lender bank’s initiative aims to empower the rural population, especially women of the rural areas to generate income by setting up small businesses under the Joint Liability Group format. The rural population stands at the bottom of the economic structure with low to average income. Many schemes are undertaken extensively for the financial inclusion of this section of the economic system.

The Reserve Bank of India is scrutinizing the complete proceedings of the matter. Additionally the governing bank of India has hinted to hire an external team to look into the matter in order to speed up the proceeding.

On the other hand, “A few large sized loan defaults during the year 2019 ensuing the fall down in stock price of the Yes Bank had shaken investor confidence. A shuffle in management, and consolidation and loan book rejig since the past two years, we were anticipating an earnings rebound and wining investor confidence again, as the economic activity witnessed some acceleration. The new allegations against the Bank by the unknown whistleblowers have maligned the Bank’s reputation and it might take some time to regain the confidence back. Though, the lender bank strongly denies it,” said Nomura.

CLSA cleared that the board of Bank was constantly receiving such types of complaints since September-October 2021 from anonymous people, including Rao, ex-vice chairperson of Bharat Financial, highlighting the risk.

The IndusInd Bank management has acknowledged that some loans were dispensed without permission from the account holders due to some technical glitch in May 2021. The glitch was resolved within two days since the mistake came into notice. The IndusInd Bank authority has made biometric authorization mandatory for the loan disbursement since then.