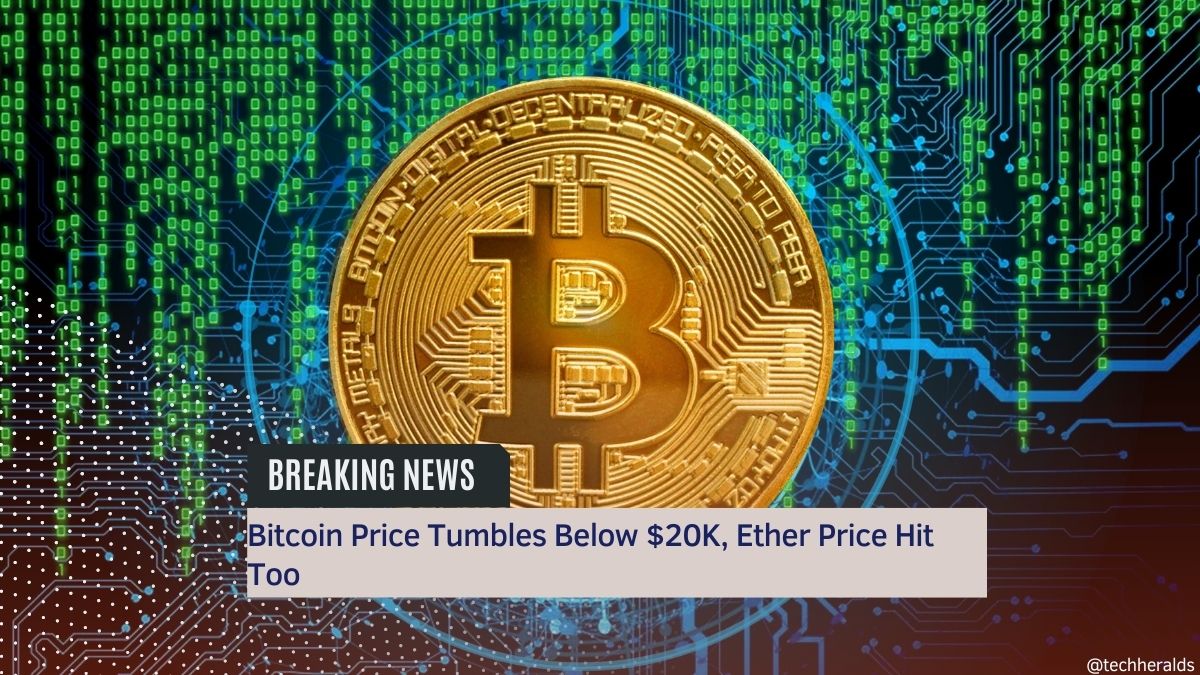 Bitcoin price has continued to drop over the past few days, and it hit an all-time low today at $18,739050. The price of one Bitcoin has continuously declined since reaching its high in November. As investors kept up their aggressive selling on Saturday, the price of bitcoin resumed its downward trend and fell below the $20,000 price level. The value of one Bitcoin dropped as low as $18,739050 at one point today and was unable to raise over $20,000 at any moment.

Bitcoin has consistently been the most valuable cryptocurrency and has reached an all-time high price of $68,000. Despite this, its value has remained relatively unchanged despite the many geopolitical concerns and unknowns. Since reaching its all-time high in November, CoinDesk reports that the value of Bitcoin has decreased by 72 percent.

As the bear market in traditional equities has continued, cryptocurrencies have been particularly hard. Traders and investors are concerned about the Federal Reserve’s potential moves to increase the inflation rate, which could lead to a rise in interest rates and a decrease in investor confidence.

The price of Ether, another primary cryptocurrency, dropped below $1,000 on Saturday, temporarily touching $975.35. This was the coin’s lowest level since January 2021. According to CoinDesk, the price of Ether dropped below $1,000 for a second time in three days this week as investors were rattled by news that Coinbase Global Inc., a cryptocurrency exchange that operates in the United States and Europe, is planning to reduce its workforce by 15%.

The decline from its all-time high of $67,802 reached in November, the fall in Bitcoin price has led to a wipeout of about $2 trillion in value across the broader market. According to statistics provided by CoinMarketCap, the overall market value of cryptocurrencies remained at around $846 billion on Saturday.

A market analyst working for the Japanese cryptocurrency exchange Bitbank Inc., Yuya Hasegawa, said that “there will be a lot of misery for a lot of investors.” People’s faith in cryptocurrencies will decline, but seasoned crypto investors and those who are optimistic about the industry’s long-term prospects will view this as an opportunity to purchase cryptocurrencies at lower prices.

According to Wendy O, there is a chance that the price of Ethereum could go down to $750 in a bear market. In November 2021, Ethereum reached an all-time high of over $4,800; hence, a drop of 85% would lead to a price of approximately $750. In addition, there are many resistance levels between $1,700 and $1,885; therefore, violent reversals are likely to occur before the price completely bottoms out.

Kavita Gupta, a cryptocurrency analyst, pointed out that the winter season for cryptocurrencies is likely to continue for another year. She says the price of a bitcoin might drop to as low as $14,000, while the cost of Ether could plummet to as low as $500.

There are several factors contributing to the current downturn: fears of a recession are pressuring investors to sell riskier assets like cryptos; the collapse of Luna and TerraUSD last month, as well as the lender Celsius suspending withdrawals this week, have further damaged trust in the sector; and the general market sell-off could become more severe if it continues.

This could lead to further price declines for cryptos, making it even harder for investors to buy them.