The Infinix Zero 5G To Launch In India On February 14, See Specifications And More Details 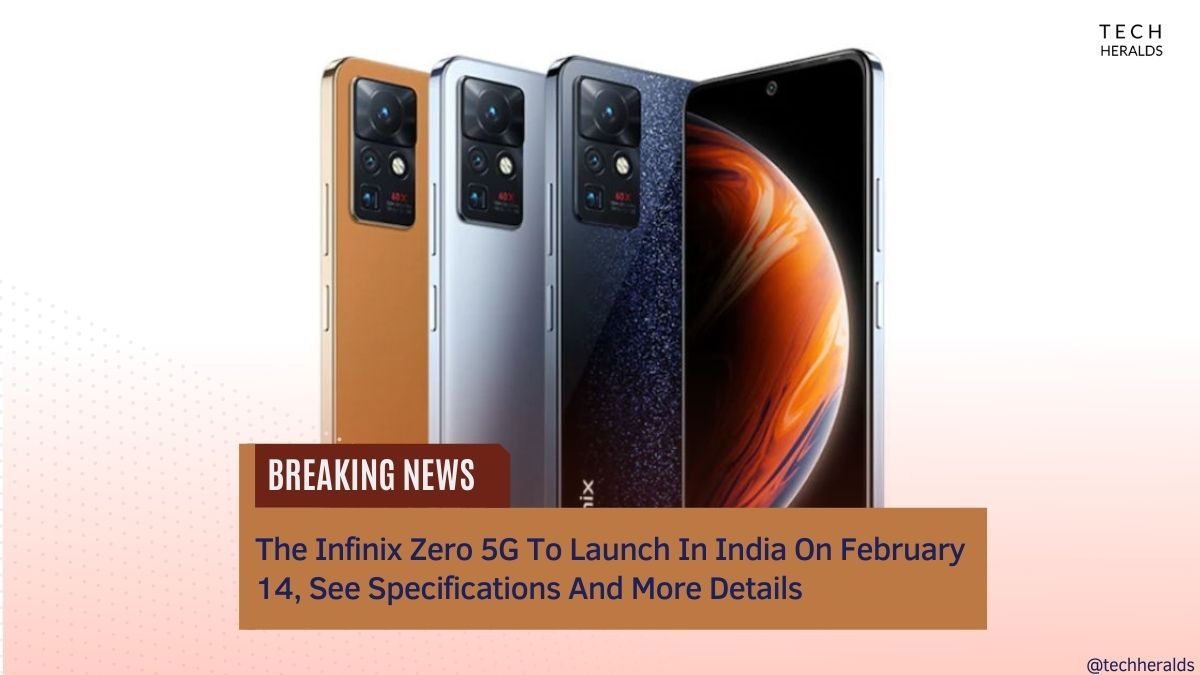 The Infinix Zero 5G is finally set to make its India debut on February 14. The Hong Kong-based brand is making a lot of noise around the launch, and we just hope that the phone lives up to all the hype.

What we know so far is that the Infinix Zero 5G will be powered by the MediaTek Dimensity 900 SoC. The phone will also have a 48MP triple-camera setup on the back, with a 16MP selfie camera housed in a punch-hole cutout.

As per the teasers, Infinix has focused on highlighting how fast its upcoming flagship smartphone is going to be with 5G connectivity in tow. It claims that it will be the fastest 5G smartphone in its segment as it comes with a Dimensity 900 SoC.

The company also announced that it has partnered with Flipkart for the launch of the Zero 5G and a separate microsite for the phone has been created where users can register for more information about future updates.

The Infinix Zero 5G is a mid-range device that comes with support for 5G. It will be one of the most affordable Dimensity 900 smartphones in the market and will likely go head-to-head against phones from Xiaomi and Realme, which have also announced their intention to bring affordable 5G devices to market.

As we inch closer to the Infinix Zero 5 launch, it’s clear that Infinix is positioning the device as a premium gaming phone. On their website, the company says that the Infinix Zero 5G will come with HyperEngine 3.0, which will improve the gaming experience for the user, and MemFusion, which is essentially virtual RAM. Although we don’t know any specific details about MemFusion yet, it’s possible that this could be a software feature that helps efficiently manage memory. If you’re someone who loves gaming on your smartphone but is worried about how much RAM your current device has, this might be an exciting iteration.

According to the latest reports, the Infinix Zero 5 would have a 6.7-inch FullHD+ display with a fast 120Hz refresh rate. The reports also suggest that the Infinix Zero 5G “will support up to 13 5G bands”. That would mean it supports a wide range of 5G bands, which isn’t too surprising considering that smartphone makers are trying their best to make sure they aren’t cutting down on any essential features. We can’t say for sure if this will impact data speeds at all, but from what we’ve seen so far from other brands launching 5G phones in India, you’re better off sticking with 4G for now anyway.

In terms of camera, the Infinix Zero 5G may come with a triple camera arrangement with a primary 48-megapixel sensor, an ultra-wide camera and a telephoto lens with up to 30x zoom. Selfie enthusiasts may get a punch hole notch in the front of the device comprising a 16MP shooter.

The Infinix Zero 5G is expected to carry a 5,000mAh battery pack with support for 33W fast charging, which should give users enough juice to last throughout the day. The smartphone is also expected to run XOS 7.6 based on Android 11 with updates for future Android updates. Another key talking point of the device is its storage as it may come equipped with UFS 3.1 storage, which would make it the first smartphone to do so in India. At this moment, the specifications of the variations and capacity possibilities are not known. Users will benefit from speedier game loading times thanks to UFS 3.1. The transmission speed of media from physical storage devices has also been increased.