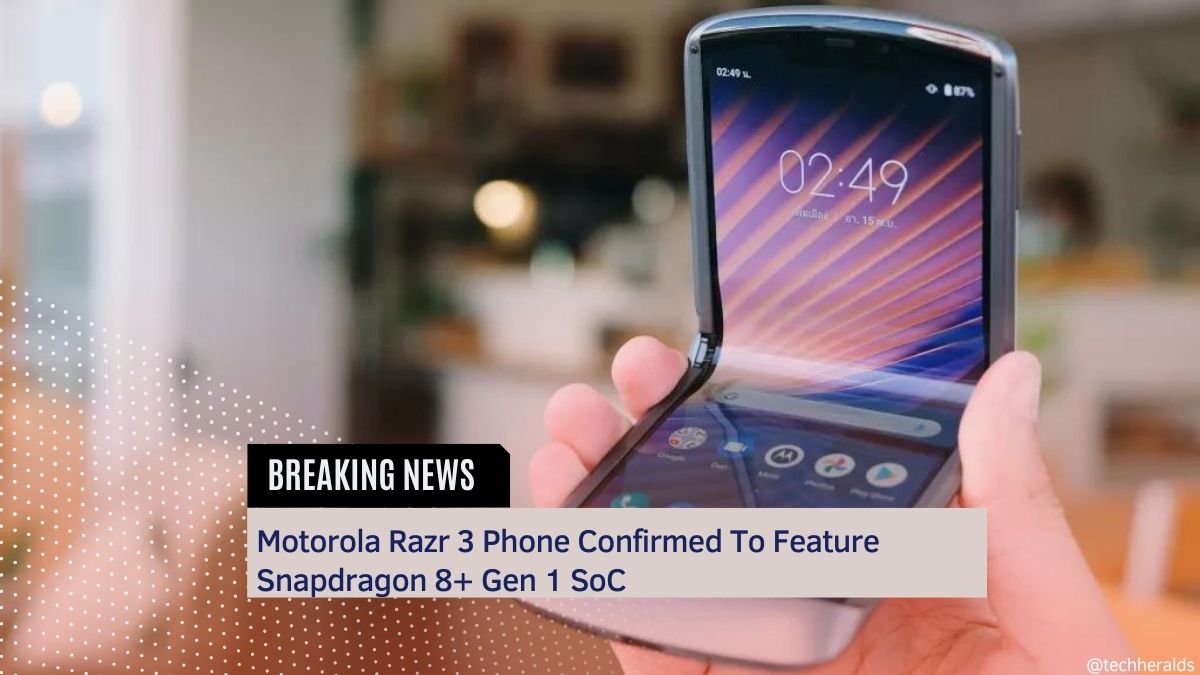 We finally have confirmation that Motorola is working on a foldable Motorola Razr 3 phone. According to the reports, the Lenovo-owned tech company has confirmed that it is indeed working on a new Razr foldable smartphone powered by the most recent Snapdragon 8+ Gen 1 SoC.

This news comes after Motorola was previously rumored to be developing such a device. An image of the upcoming smartphone went viral on the internet, and it pretty much-exposed specifics on the likely design and even specifications. Now, Motorola has formally confirmed that it is working on a new Moto Razr foldable smartphone powered by the most recent Snapdragon 8+ Gen 1 SoC.

In a post on Weibo, Shen Jin, the General Manager of Motorola, shared a teaser picture about the Snapdragon 8+ Gen 1 SoC. We can see a depiction of the highly lighted Snapdragon 8+ Gen 1 on top of a broad, V-shaped design. This gives the impression that the foldable Motorola Razr 3 phone will have a clamshell form factor, which verifies the coming of the next-generation Motorola foldable phone.

The device takes on an aesthetic similar to the original Razr phone, with some fundamental changes. The main display on the Motorola Razr 3 features a punch hole and minimal bezels around it, which is different than its predecessor’s curved sides. The mobile device in question does not have a chin that projects forward, and the fingerprint scanner has been relocated to the right side of the power button.

According to live photographs of the phone that were leaked in the past, it will also come equipped with a dual-camera setup for taking pictures. The camera sensors are arranged in a horizontal orientation inside the camera. It is a primary lens with a resolution of 50 megapixels and an aperture of 1.8. A 13MP unit accompanies it for assistance.

The rear of the Motorola Razr 3 phone has a dual-camera setup for taking pictures. The cameras are arranged horizontally on either side of where your index finger would rest when holding it up to take photos or video calls—a convenient location for gripping your phone! The screen on the phone would have a resolution of Full HD+.

The SoC also supports Quick Charge 3.0 technology, which allows you to charge your device up to 40% faster than previous generations of charging technologies. Additionally, it supports LPDDR5 memory storage speeds up to 3200 MHz! The GPU supports 8K video playback at 30fps and 4K video playback at 120fps for videos, and 8K video capture at 30fps for movies.