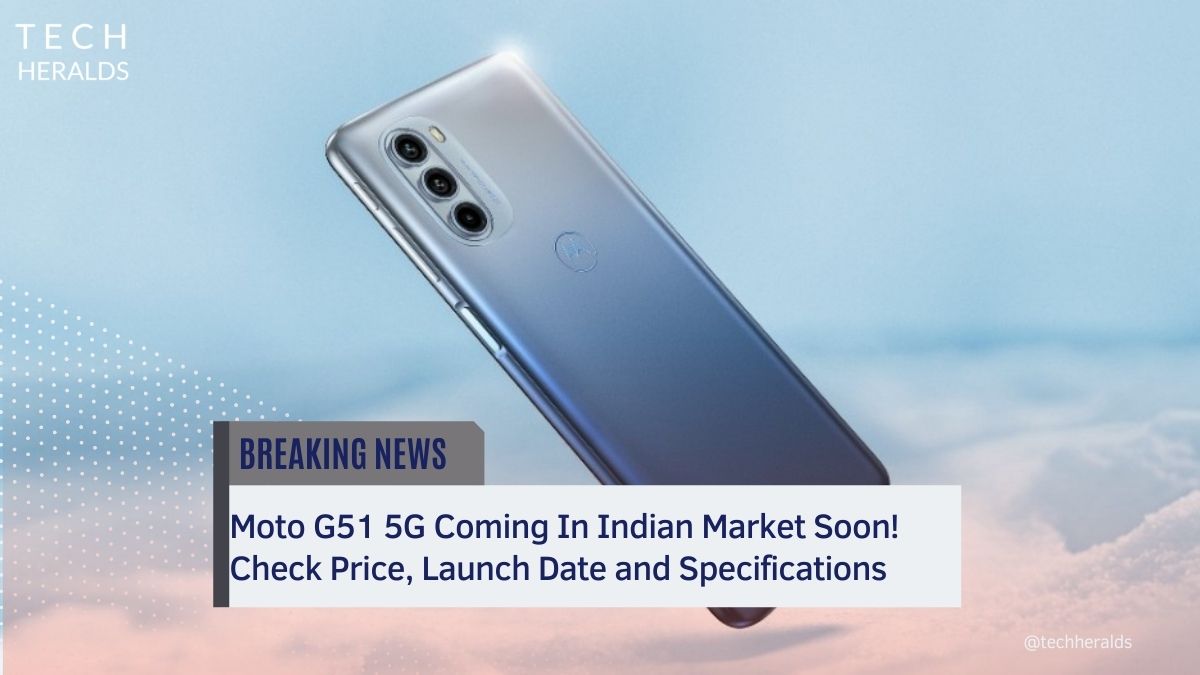 Moto G51, another smartphone in the Motorola G series, is expected to launch in India soon. Just a few days ago, Lenovo owned Motorola had announced the launch of its budget segment smartphone Moto G31 on 6 December 2021. The Moto G31 will be exclusively available for purchase on Flipkart.

When Will Moto G51 5G Launch In India?

According to the tip-off circulating over the internet, the Motorola G51 smartphone is expected to launch in India on 10 December. A Twitter user called Mukul Sharma leaked the launch date of Motorola G51 5G and asserted that the 5G smartphone would come to India on 10 December 2021. On the other hand, Motorola has yet to declare the launch date formally. In November, Motorola has already launched the Moto G51 in the Chinese market.

Moto G51 got a look much similar to Moto G31. The smartphone manufacturing company has shared a teaser of the unnamed phone on its Twitter handle, but it was pretty easy to predict that it was Motorola G51 5G.

Moto G51 is the world’s first smartphone that a Qualcomm Snapdragon 480Plus processor will power. Additionally, the 5G smartphone will run on Android 11 out of the box.

Talking about the camera megapixels number, the Moto G51 5G has a 50MP main camera and 8MP ultra-wide and 2MP macro lenses. The phone has got a 13MP camera on the front, which is perfect for taking selfies and video calls.

Moto G51 5G has a screen size of 6.8 inch Full HD IPS LCD display and has a screen resolution of 1080 X 2460 pixels. The display has got an all-new 120Hz screen refresh rate that will add to the smoothness of the scrolling touch experience. The 6.8-inch display of the phone offers a 20:9 aspect ratio.

The Snapdragon 480 Plus processor of Moto G51 5G is mated with RAM up to 8GB and 128GB data storage. The 5G smartphone was previously launched in Europe with the same configuration, and the analysts expect the company would retain the configuration for the Indian market. Moto G51 comes with a 5000mAh battery and supports 10W charging. The phone will have fingerprint scanner to unlock the device situated at the back side of the phone

The price of Moto G51 5G is expected to be around Rs 19,600 for Indian consumers. The smartphone was priced at EUR 229.99 in Europe. The reports suggest that the upcoming smartphone will be priced under Rs 20,000 in India. Moto G51 will be Motorola’s another smartphone to be price under twenty thousand in India. Moto G31 launching on 6 December will be launched under the fifteen thousand bracket.

Reports suggest that Motorola might soon launch Moto G200 after launching Moto G51 5G in India. Moto G200 will also boast a 6.8-inch screen with 1080 x 2460 pixel resolution. The screen refresh rate of Moto G200 should be 144Hz, and the camera department should boast 108MP primary camera and 2MP macro and 16MP ultra-wide camera lenses. The phone will be powered by Snapdragon 888+ processor paired with 8GB RAM. Moto G200 will support fast charging up to 33W and house a 5000mAh battery.