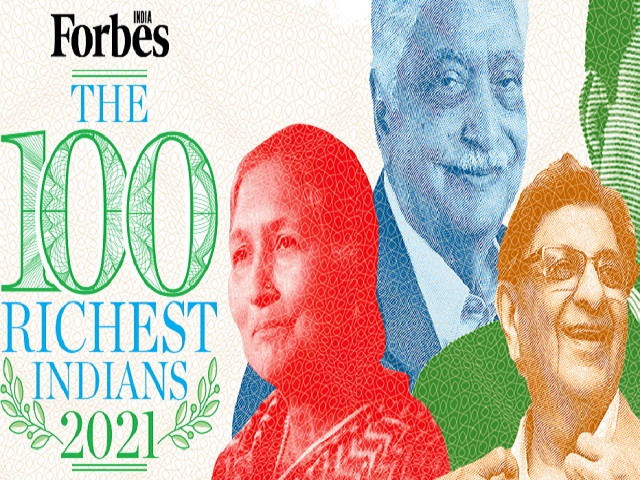 Forbes recently has released the list of the top 100 richest Indians in 2021. Corporate enthusiasts closely keep a tab on the leapfrog game of industrialists making it to the top-10 club. According to Forbes, the wealth of Indian Billionaires augmented up to 50 percent during the second year of the corona pandemic. Forbes shared a detailed post on its website that describes the gains and losses of the Indian plutocrats. Along with that, the post describes top losers, new entrants, and youngest billionaires in its various segments.

The cumulative fortune of the 100 richest Indians touched a new height of $775 billion, post an increase of $257 billion from the last financial year – about a 50 percent gain compared to 2020. Forbes credits this upsurge in fortune to the high stock market prices during the previous few months. The Indian stock market also marked a 52 percent rise in Sensex during the last 12 months.

Below is the list of the top 10 richest Indians.

Mukesh Ambani, the chairman and managing director of Reliance Industries, marked the 1st position on the chart with a total fortune of $92.7 billion. He climbed to the top place first time in 2008 and maintaining it for 14 years consecutively. Mukesh Ambani bagged another $4 billion in a year.

Second, on the chart is Gautam Adani, with his 74.8 billion fortune. Gautam Adani is the founder of Adani Group, operating in logistics, agro, resources, and energy enterprises. Gautam Adani stands only $17.9 billion behind Mukesh Ambani and is the one whose fortune bounced up 200 percent within a year. He gained $49.5 billion in the last 12 months.

Shiv Nadar holds third place on the chart with a total fortune of $32 billion against $20.4 billion in 2020. His fortune saw an upswing of $10.6 billion in 2021. Shiv Nadar is the founder of HCL Technologies and a prominent name in the information and technology sector.

Cyrus Poonawala bagged the 5th spot this year on Forbes 100 richest Indian list. His fortune also showed significant growth during the period. He owns $19 billion against $11.9 billion in 2020. He is the founder of Serum Institute, Pune

Lakshmi Mittal ranked 6th on the chart with a total net worth of $18.8 billion. His fortune saw a boost of $8.5 billion in the current year. He is a UK-based Indian and chairman of Aperam, a stainless steel manufacturing company.

Savitri Jindal reenters the Forbes top 10 Indian people chart with a fortune of $18 billion and reserve the 7th position. She is the chairperson of OP Jindal Group. Her fortune demonstrated 3x growth within a year. Her worth last year was approximately $6.6 billion.

Uday Kotak ranks 8th on the chart. He owns a fortune of $16.5 billion against $11.3 billion in 2020. Uday Kotak is the Managing Director of Kotak Mahindra Bank.

Pallonji Mistry comes 9th on the chart with his fortune of $16.4 billion against $11.4 billion last year. Pallonji Mistry Indian Irish origin construction tycoon. He holds an honor to be the wealthiest Irish person.

Kumar Birla marks the last position on Forbes’s top 10 richest Indians. He holds a fortune of $15.8 billion and is the chairman of Aditya Birla Group.

According to Forbes, more than 80 percent of the members on the list recorded a surge in their net worth. Being that said, Forbe’s top 100 richest Indians list is getting exclusive.