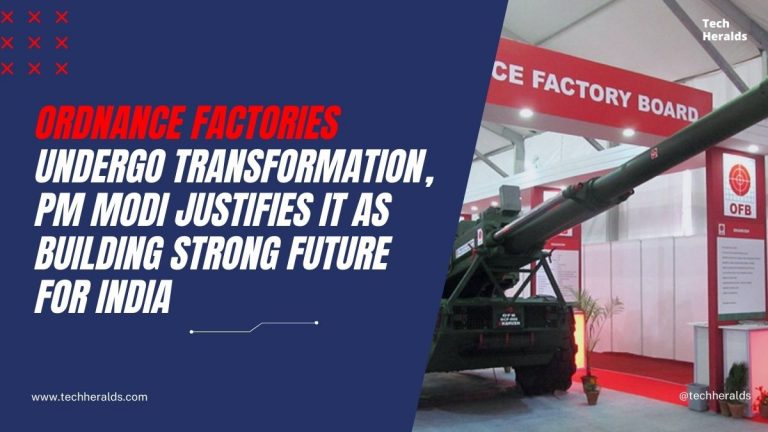 Under the supervision of prime minister Narendra Modi, the government of India is reinforcing the ordnance factories. The defense ministry has officially announced that it will revamp the 200 years old Ordnance Factory Board into seven different corporate companies.

The government was long thinking about reconstructing the generations-old ordnance factories board regulating 41 ammunition and military gear manufacturing plants into seven state-owned companies to strengthen the nation.

According to prime minister Narendra Modi, ordnance factories needed a revamp for many years, but the proposal remained pending. He added further that the green nod to the prolonged proposition would boost the efficacy and competitiveness of the ordnance factories.

New Companies That Are Carved Out Of Ordnance Factories

While speaking at an event organized by the defense ministry, prime minister Narendra Modi said that the creation of new defense public sector companies would serve as a robust foundation for the Indian military in upcoming times. He further continued that the former president of India, APJ Abdul Kalam devoted his whole life to bolster India on the defense front. Breakdown and the new facet of the ordnance factories would energize Abdul Kalam’s dream of a strong India.

Narendra Modi expressed his satisfaction with the up-gradation of Ordnance factories, saying that India would not have to rely on other countries for her need of military gear and ammunition. He firmly stated that the newly carved companies would play a seminal role in mitigating India’s dependence on the other countries.

Prime Minister Narendra Modi is relentlessly trying to incentivize indigenous companies under his extensive ‘Atmanirbhar Bharat’ scheme to alter dependencies on the foreign countries. He made many new resolutions to mark the Semi sesquicentennial jubilee of India’s independence. The restructuring of ordnance factories was one of his plans to create a new future for India.

Rajnath Singh, The Defence Minister Of India, was also present at the event organized by the defense ministry. To support the approval of forming seven different state-owned defense companies, he said that the government’s decision would fulfill several deficiencies of the present structure of the ordnance factories board. He further appealed to the Government of India to incentivize these companies to remain ahead of time, find new prospects, and insulate the interests of staffers at the same time.

While praising the defense sector, Rajnath Singh said the recent reforms in India’s defense sector had pushed it to the new pinnacles. He concluded that the defense ministry of India is looking forward to scaling up the turnover of aerospace and defense services to Rs 1.75 lakh crore by the year 2024.