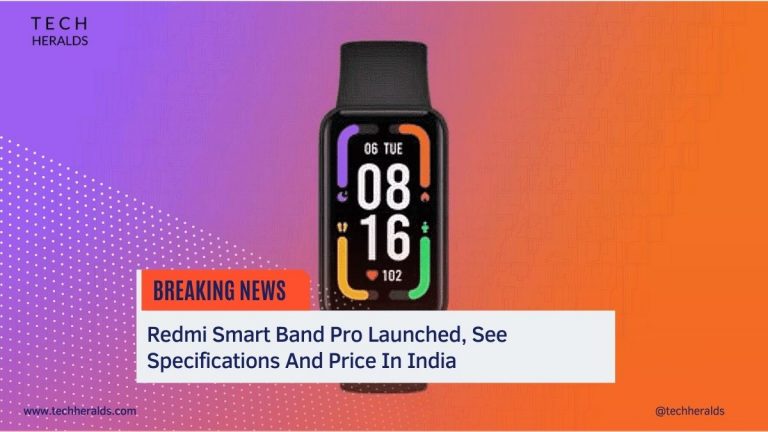 Redmi has launched a slew of new products in the event that took place in China recently. The event revolved around the launch of the Redmi Note 11 lineup. A few days later, the China-based technology company has promulgated the rumored and much-awaited Redmi Smart Band Pro launch. Smart Band Pro is the facelifted version of the existing Redmi Smart Band and packs advanced hardware and newly added exciting features.

The sleek Redmi Smart Band Pro has a 1.47-inch small Bassel AMOLED touch screen mated to a polycaprolactam body made-up of nylon and plastic. The AMOLED screen has a maximum brightness of 450 nits and consists of 282 pixels per inch (PPI). A 2.5D tempered glass shields the smart band’s screen. The Dial looks glossy and stylish. The straps used for Redmi Smart Band Pro are made up of plastic and can be changed.

The Redmi Smart Band Pro houses several features helpful in tracking and monitoring health, sleep, and daily activities. The watch includes a gyroscope, heart rate monitor, accelerometer, and SpO2 checker. A light sensor is also integrated into the watch that auto-adjusts the screen brightness according to the light exposure. The Redmi Smart Band can also be worn while swimming as it is water-resistant and works fine up to 50 meters under the water.

The advanced technology used in making Smart Band Pro can monitor 110 plus workouts, out of which 15 are skilled modes. A few sports activities recognized by the smartwatch include swimming, running, cycling, yoga, and hill-climbing. The smartwatch is also trained to monitor women’s health and supports apps like Apple Health and Strava – both used to track human exercise using social network features.

Additionally, Redmi has also launched a Redmi Watch 2 lite, a downgraded model of the Redmi Watch. A lite version of the smartwatch has a 1.55 inch LCD screen with a 320 x 360 pixels resolution. Feature-wise, there’s a significant similarity in the features offered in the Smart Band Pro and Redmi Watch 2 Lite.

Gyroscope, accelerometer, GPS, and light sensor are also a part of Redmi Watch 2 Lite. The downgraded smartwatch is also water-resistant and normally performs under the water. A little larger battery than Smart Band Pro can be seen in a Redmi Watch 2 Lite, which comes with a 266mAh battery. The expected battery life, under normal usage, is expected around ten days. The company claims that the Redmi Watch 2 lite can survive up to 14 hours in GPS mode and five days in case of heavy usage.