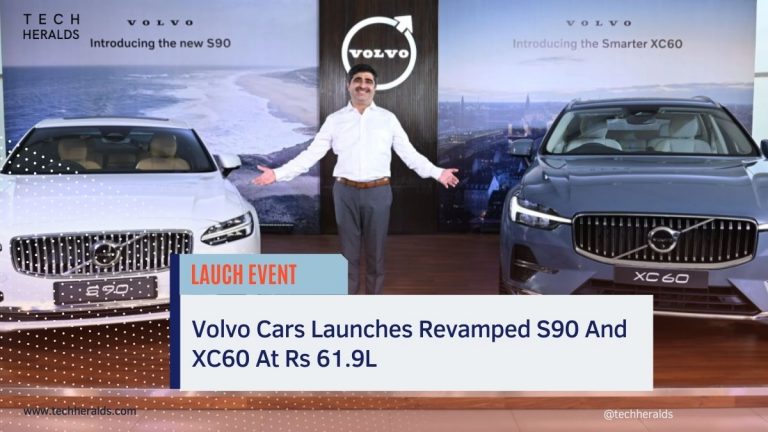 Volvo has launched the 2021 upgraded models of the S90 Sedan and XC60 SUV in India on Tuesday. Both the models launched in India come in mild petrol hybrid variants, and their ex-showroom prices are pegged at Rs 61.90 lakh.

Volvo Cars have recently committed that it would only manufacture electric vehicles by the end of 2030. With that said, Volvo cars have slowly started to sideline the diesel engines, and it will ultimately focus on manufacturing electric vehicles as we march towards 2030.

The launch of petrol only varients of S90 Sedan and XC60 SUV shows Volvo Cars slowly inclining towards environmental friendly technology and would eventually have electrified cars and SUVs lineup.

The extended warranty of up to three years can be availed on both facelifted models at a surcharge pay of Rs 75 thousand. The Volvo cars will offer S90 and XC90 models in India under knocked down the system, which means these two models will be assembled in India.

The new S90 SedanSedan has a chromium railing supporting the central grille at the front part of the car. Also, the grille comes with a new pattern and a newly designed Volvo badge. The face grille seems to be a little slower than the previous model. The use of chromium bars can also be seen in rear body parts.

Talking about the facelifted XC60, it also sports nearly the same modifications. The chromium bar surrounds the central mesh, and the grille hosts the new Volvo logo. The alloy wheels also come in a new style now.

What’s under the bonnet?

The upgraded models of the S90 sedan and XC90 SUV come with petrol mild-hybrid powertrain engines. The diesel engines used in the previous versions of both vehicles are now replaced with petrol engines to adopt greener technology.

The latest models are powered by 250 horsepower, four-cylinder motor bonded to the 48V electric motor. The mild-hybrid petrol engine produces 350Nm torque coupled with an eight-speed automatic gearbox, a standard engine in the S90 sedan and XC60 models. The advanced technology enables the upgraded models to restore the energy lost when the breaks are applied by charging the 48V battery.

Facelifted Volvo S90 and XC60 come with an upgraded air purification unit in the cabinets. The infotainment system is well integrated with the Google services that allow the person onboard to access, control and enjoy several services. Features like music, map, and temperature control can be operated through the infotainment screen. Google integrated technology allows the passenger to communicate with other google operated appliances without worrying about the network connectivity.