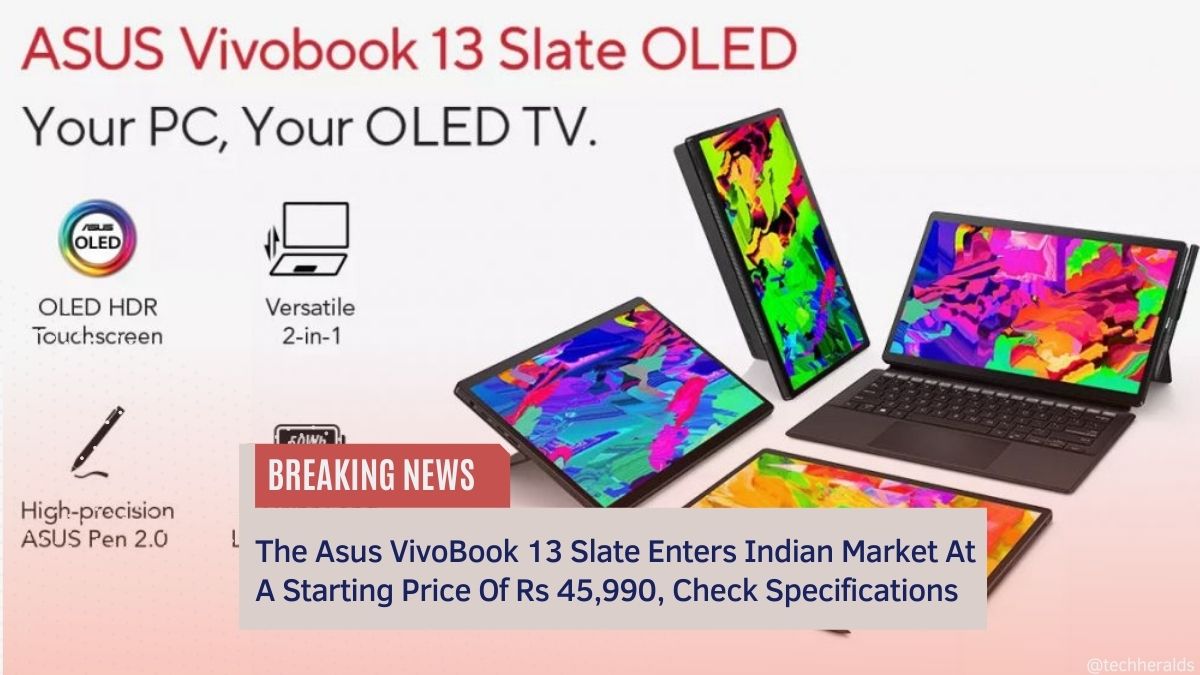 ASUS recently released their VivoBook 13 Slate OLED. A 2-in-1 convertible notebook, the tablet was initially introduced to the market in November of last year for the United States market. It’s powered by an Intel Pentium Silver N6000 CPU and up to 8GB of RAM, with a maximum internal storage capacity of 256GB of NVMe flash storage. There is also a variant with 4GB of RAM and 64GB of eMMC storage.

The VivoBook 13 Slate runs Windows and has a 13.3-inch OLED display. It is a 2-in-1 laptop that may also serve as a tablet for watching information when the need arises. It also boasts compatibility for a detachable keyboard and the new Asus Pen 2.0 pen, which is also used for taking notes, editing, and other tasks, among other things.

The VivoBook 13 Slate is touted as the world’s first 13.3-inch OLED detachable laptop to run Windows. The Asus Pen 2.0 has 4,096 levels of pressure sensitivity and is compatible with most writing apps on Windows 10 devices (including Office 365).
The VivoBook 13 Slate has a 13.3-inch OLED display that’s compatible with HDR and has been verified by TÜV Rheinland. The screen supports Dolby Vision and has a resolution of 1,920 x 1,080 pixels, so you can watch all the Netflix movies and TV episodes you want in high definition and enjoy them throroughly.

The audio experience is also very impressive in this laptop thanks to its four built-in speakers that are capable of supporting Dolby Atmos and a smart amplifier that can be used to boost loudness and reduce distortion. Plus, the VivoBook 13 Slate is equipped with a 50Wh battery with 65W fast charging that allows you to binge-watch for up to 9 hours on a single charge!

The VivoBook 13 Slate is a thin and light notebook that’s powered by the latest Intel CPU. It’s got a sleek metal design and comes with some great features like Wi-Fi 6 and a fingerprint scanner, as well as excellent battery life. The VivoBook 13 Slate also has a unique look, with a slate grey finish that’s complemented by the company’s signature concentric circle pattern.

In terms of specifications, the VivoBook 13 Slate is powered by an Intel PQC N6000 CPU with Intel UHD Graphics and can be configured with up to 8GB of LPDDR4X RAM and up to 256GB of solid-state drive storage. It also features two cameras, a 13-megapixel primary camera and a 5-megapixel front-facing camera, built-in. When it comes to connectivity, there’s support for Wi-Fi 6, two USB Type-C ports (one for charging, the other for data transfer), a memory card reader, and Bluetooth 5.2. It comes pre-installed with Windows 11 Home, and you can find instructions on how to set up your user account once you boot up the device.

Also Read: Amazon Luna, A Gaming Platform, Launches For Public In The US, Comes Included In Amazon Prime Membership

The Asus VivoBook 13 Slate is available in three different configurations, with prices beginning at Rs 45,990. However, the device only sells in the black color variant.
Rs 45,990 for 4GB RAM and 128GB eMMC.
Rs 57,990 for 4GB RAM+128GB eMMC (with fingerprint scanner and stylus).
Rs 62,990 for 8GB RAM+256GB SSD (with fingerprint scanner and stylus).
The VivoBook 13 Slate will be sold on Amazon, Flipkart and through the physical market also.

Also Read: Apple iPhone SE 3 5G Claimed To Be The Cheapest Phone From The Tech Giant, Launching On 8 March