The Moto G52 Launching In India On April 25 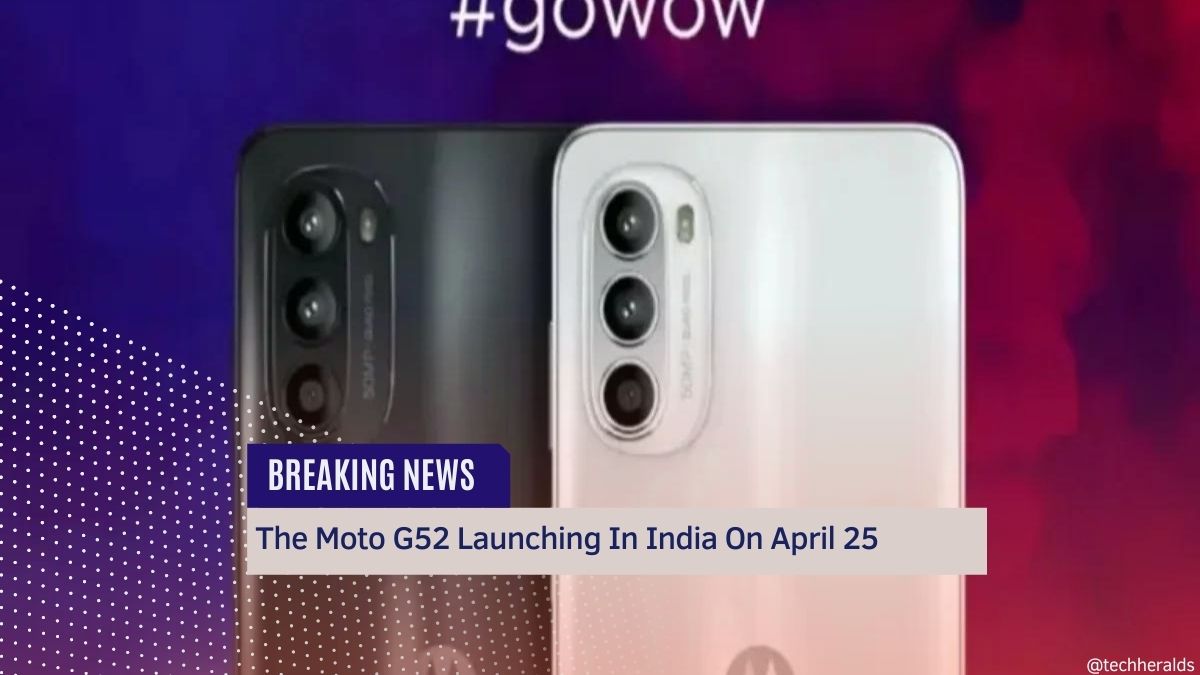 Motorola, the sister company of Lenovo, is introducing the Moto G52 in India on April 25. Motorola has already launched the phone in other regions of the world, and now it’s the turn of India. Motorola’s upcoming G-series offering is expected to be a budget phone. In India, the smartphone should be priced under Rs 20,000 and will go on sale via Flipkart.

As the phone is already launched in the European market, much of the Moto G52 specifications are not a secret to the tech enthusiast community. Motorola has formally revealed that the Moto G52 will have a 6.6-inch POLED screen with a 90Hz refresh rate. For the uninitiated, Moto G52 is the successor of the Moto G51 launched on December 16 2021, in India.

Furthermore, the tech firm has also confirmed the phone launch date for India, which is April 25. Starting at 12 pm, the streaming of the live launch event will be available on the company’s official YouTube channel and social media handles. Additionally, Flipkart has already published a microsite for the Moto G52 and confirms significant specifications of the phone.

Let’s look at the additional details of the upcoming smartphone from Motorola.

In terms of value for money, the Moto G52 will be a terrific phone, and it will include a 6.6-inch POLED display with a Full HD+ resolution. The display comes with a refresh rate of 90Hz and bezels up to 2.5mm thin, allowing for an incredible viewing experience. With its 20:9 aspect ratio, the screen is certainly large. There will be a punch hole in the middle of the screen on the front.

There will be three camera lenses on the back of the Moto G52 for taking photos and videos. The 50MP primary camera is joined by an 8MP ultrawide camera and a 2MP depth sensor. Alongside the camera lens is an LED flash for further illumination.

The Moto G52 will also come preloaded with 128GB of internal storage and 6GB of RAM and a 5G modem to connect to next-generation networks. There’s no word yet on when this phone will go on sale.

It will be made of polycarbonate plastic on the rear, which gives it an extremely lightweight feel. It is powered by a 5,000mAh battery capable of 30W charging that will power the Moto G52. The MyUX skin, based on Android 12, will be present on the phone. Furthermore, the device may have a side-mounted fingerprint scanner, an audio jack (3.5 mm), an IP52 rating for water resistance, two speakers, and Dolby Atmos compatibility.

According to a report on a website, the phone will be available in India with 6GB of RAM and 128GB of storage. It is unclear whether or not there will be a variant with more memory capacity, but if there is one, it will likely cost more than Rs 17,999. The phone would feature two colours: black and white.

Motorola has not announced any specifics about the Moto G52’s availability or launch date in India yet, so it’s unclear when exactly it will go on sale in the country. We’ll keep you up-to-date as soon as we know more.