The Nokia G21 Launched In India, See Specs And Price 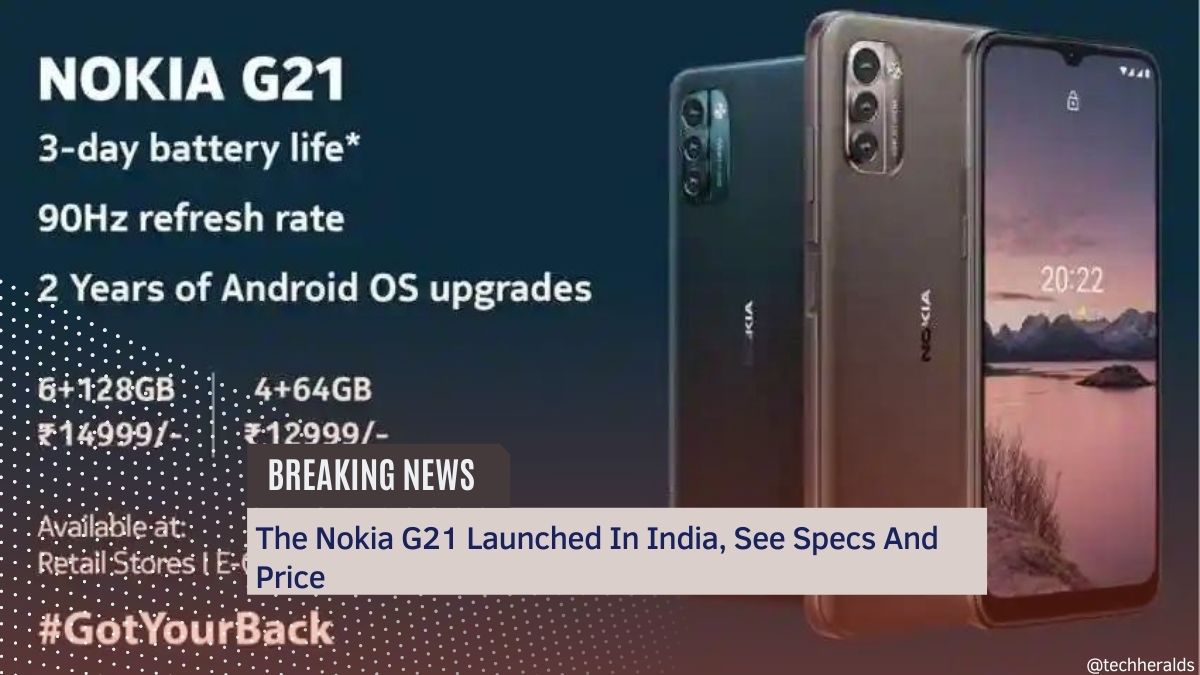 Nokia has announced a new affordable smartphone in its G series: the Nokia G21. Equipped with a screen with a fast refresh rate, a triple-camera configuration, stock Android, and a massive battery, among other features, the Nokia G21 is designed for low to mid-budget customers.

According to Sanmeet Singh Kochhar, Vice President of HMD Global, “Nokia G-series is our mid-range smartphone series with elegant Nordic aesthetics, offering quality smartphone experiences to as many people as possible.”

“The Nokia G21 has been developed for folks who love to create,” he said, citing key features that would alleviate low battery anxiety and security worries.

The Nokia G21 is the latest addition to the company’s growing G series of smartphones. HMD Global, the owner of the Nokia brand, has made several changes to its smartphones this year. Read on for more details.

Nokia’s G21 is a powerful phone. It runs on the Unisoc T606 SoC and up to 6GB of RAM, ensuring that it will be able to handle most tasks you throw at it. The phone comes in two storage capacities: 64GB and 128GB, with the latter being expandable up to 512GB through a microSD card slot.

The G21 runs stock Android 11, which is a bit of a bummer, given that Android 12 has been available for many months now, and the Nokia G21 is a flagship device.

In terms of optics, the G21 is equipped with a triple-camera arrangement on the back, featuring a 50 MP primary sensor. There is also a 2 MP macro device and a 2 MP depth sensor in addition to the primary camera. The waterdrop notch on the front of the phone features an 8-megapixel selfie camera with LED flash.

Also Read: The Realme Narzo 50A Prime Launched In India

The Nokia G21 comes with a large 6.5-inch HD+ (720 x 1600 pixels) LCD with a 20:9 aspect ratio, which is standard for Nokia smartphones. The display also has a 90Hz refresh rate and a 180Hz touch sampling rate, among other specifications. Finally, the G21 is capable of OZO Spatial Audio capture with the assistance of two microphones.

The Nokia G21 derives the power from a large 5,050 mAh battery capable of rapid charging at up to 18W. However, Nokia only includes a 10W power adaptor in the package.

Also Read: The Moto G52 Launching In India On April 25

Nokia has announced that the Nokia G21 smartphone is now available in India. The phone is priced at Rs 12,999 for the primary 4GB/128GB configuration and Rs 14,999 for the 6GB/128GB variant. The phone can be ordered directly from Nokia’s website, and it comes in two colour options: Dusk and Nordic Blue.

The company also announced the introduction of two new feature phones — the Nokia 105 and Nokia 105 Plus — and two new audio accessories: the Nokia Comfort Earbuds and the Nokia Go Earbuds+.