The Oppo Reno 7 Pro 5G Launched In India, See Price, Specifications And Where To Buy 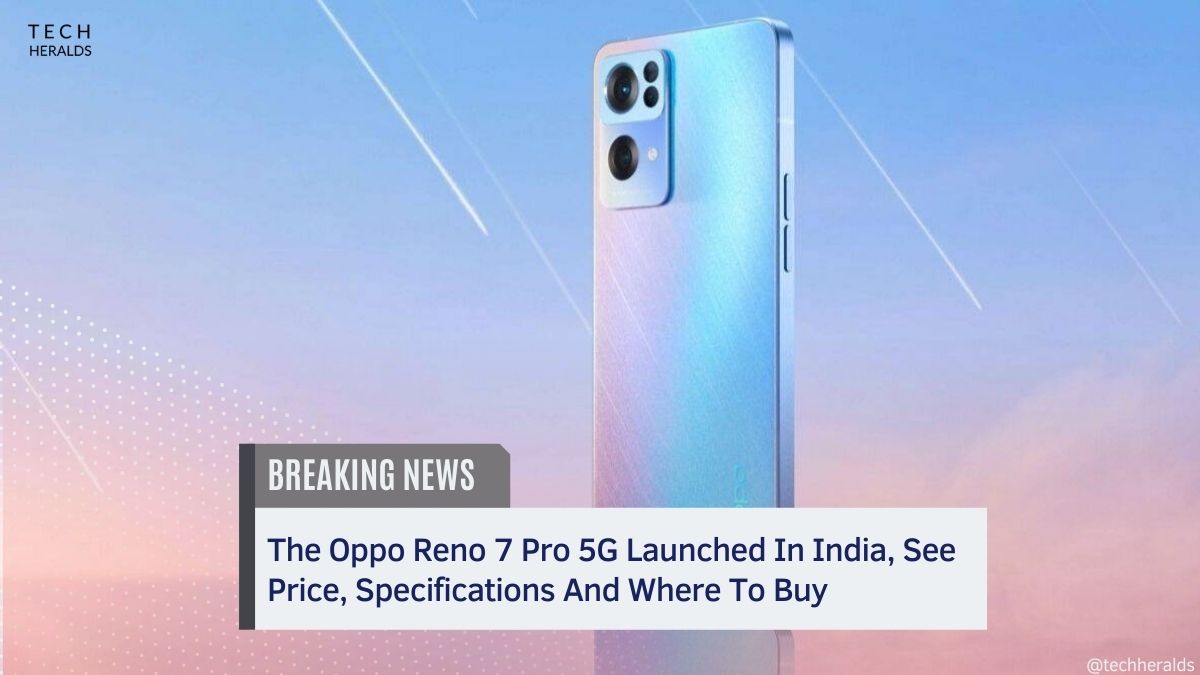 The Oppo Reno 7 Pro 5G has been given a makeover. It now has a more modern appearance. However, the Reno 7 5G, the entry-level model in the Reno series, retains the styling of the Oppo Reno 6. The Oppo Reno 7 5G camera setup is its most notable feature, which comes with a 50MP IMX766 primary camera and color temperature sensor; the phone has three cameras on its back. As for a selfie camera, it sports an IMX709 front-facing camera with a 32-megapixel Sony sensor. Performance is not an issue when it comes to the Oppo Reno 7 Pro. Powered by a MediaTek Dimensity 1200 processor, it has up to 12GB of RAM and 256GB of internal storage.

Oppo’s flagship phones are known for their design. In terms of its design and feel, th Oppo Reno 7 Pro 5G is a standout. After pursuing the “endless” fantasy of going borderless for years, Oppo finally gave its flagship Oppo Reno 7 Pro 5G phone a substantial overhaul. Oppo has opted to remove the device’s curved screen. The Reno 7 Pro, on the other hand, takes design features from the most recent iPhone models. Aside from being compact, it’s constructed using high-quality materials as well. However, the Reno 7’s screen is curvier than the last Reno phones; thus, it’s not relatively as flat as the last Reno phones.

The Oppo Reno 7 Pro 5G will be available for Rs 28,999 from February 17th. The Reno 7 Pro 5G costs Rs 39,999 (about $70). Starting on February 8th, it will be available for purchase. ICICI Bank and IDFC First Bank cardholders will also get a 10% discount on both phones from Oppo. The phones will be sold on Flipkart, Oppo’s website, Vijay Sales shops, and Vijaysales.com, as well as at Oppo’s retail locations.

Also Read: OnePlus Nord 2T Will Replace Nord 2? Leaks Suggest Nord 2T Will Come In India Around April Or May 2022

The Oppo Reno 7 Pro 5G has a 6.55-inch Full HD+ AMOLED screen with a 120Hz refresh rate. The MediaTek Dimensity 1200-Max CPU, which supports up to 12GB of RAM and 256GB of internal storage, highlights the smartphone. Oppo’s Reno 7 Pro is powered on ColorOS 12, an Android 12 skin. In among the three-camera setup, the phone has an 8-megapixel ultrawide lens, a 2-megapixel macro lens, and a 50-megapixel Sony sensor as the primary camera. The device’s 4,500mAh battery supports rapid charging @ 65W.

6.43-inch Full HD+ display with 90 Hz refresh rate and 1920 x 1080 pixels resolution on the Oppo Reno 7 and Oppo Reno 7 Pro have identical camera configurations. The phone’s processors are a Qualcomm Snapdragon 778G SoC, which supports up to 12GB of RAM and 256GB of internal storage. In addition to 60W rapid charging, the phone includes a built-in battery capacity of 4.500mAh.