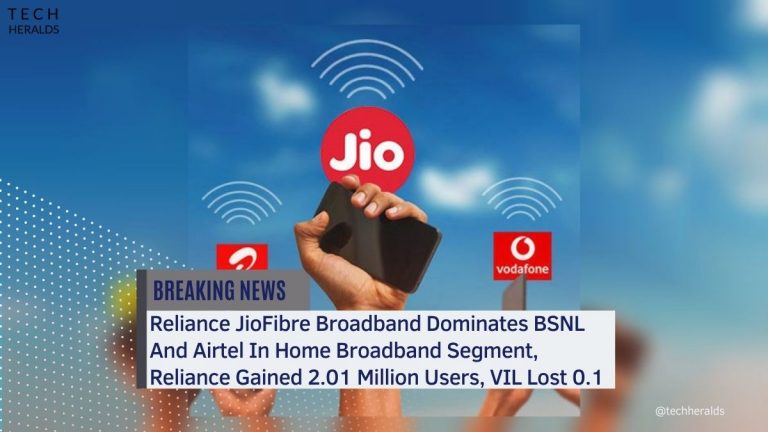 With passing time, a tug of war between India’s leading telecom operators is getting tougher. However, Nomura Research, a Japanese analyst firm’s data interpretation, shows that Reliance JioFibre Broadband has dominated the state-owned BSNL’s ( Bharat Sanchar Nigam Limited) broadband network and has pushed down Bharti Airtel to the third position in India’s telecom sector.

As per the data published by the Telecom Regulatory Authority of India, The Mukesh Ambani group managed to add .019 million subscribers to its Reliance JioFibre Broadband network in November 2021, which made the total number of active Reliance JioFibre Broadband users to 4.3 million. Jio, in terms of broadband users, surpassed Bharti Airtel and Bharat Sanchar Nigam Limited (BSNL) to become India’s number one wired broadband service provider. As of November 2021, Bharti Airtel had 4.1 million users, while BSNL had 4.2 million users.

As per statistics collected by the industry regulator, Reliance Jio first gained surplus customers than Airtel in the number of home internet subscribers counted in August last year. Later, the telecom company continued to maintain its position in the following months. However, the Reliance JioFibre Broadband network continued to trail behind BSNL until October 2021. According to ICICI Securities, the market share of Reliance JioFibre Broadband stood at 17.8 at the November month-end against BSNL (17.2 percent) and Airtel (16.7 percent).

According to their estimates, with the basic prepaid plans starting at Rs 99 between July and November 2021, experts predict Airtel and Vi’s active user additions to stay low in the next few months.

As per the figures, the total number of customers using mobile networks stayed stagnated at 996 million. Additionally, the telecom industry experts also noticed a tremendous surge in Reliance Jio’s subscriber base during November 2021 compared to its rivals.

Xiaomi 11i HyperCharge And 11i Launched In India, Company Claims To Be The Fastest Charging Phone