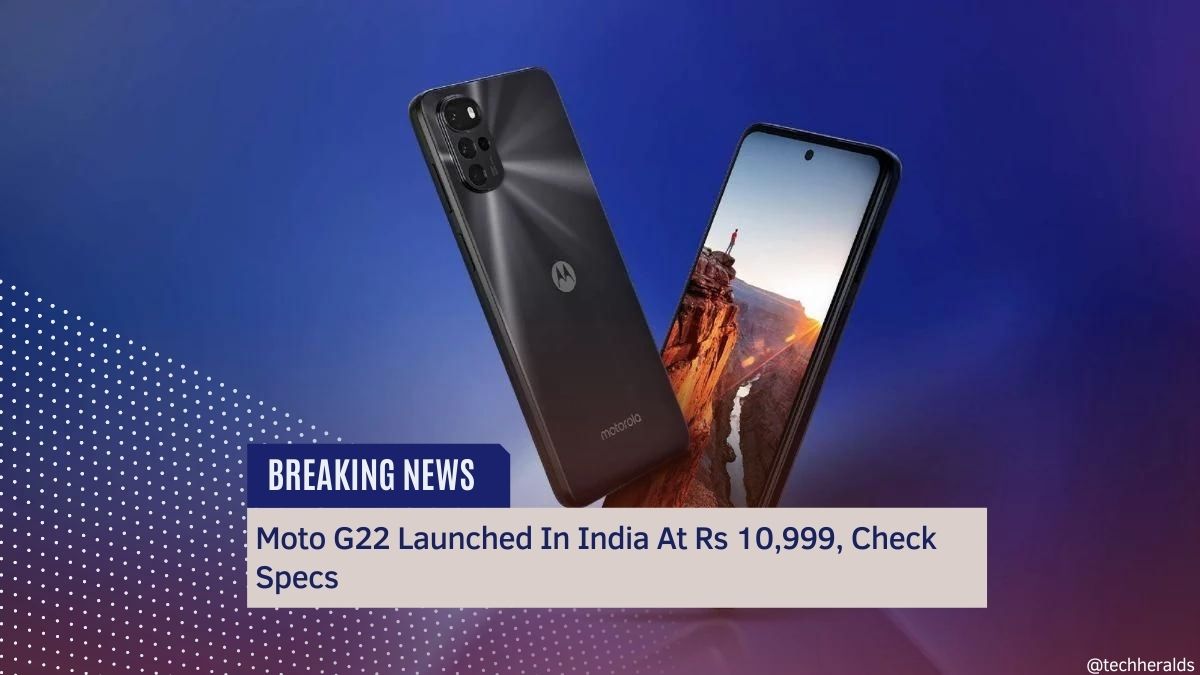 Based in the United States, Motorola has finally launched its budget-friendly smartphone, the Moto G22, in India. Motorola has already released the smartphone on the worldwide market, which includes the European market. The Moto G22 is the brand’s newest product, and it is now available to customers in India soon after its global launch.

The Moto G22 comes under the Rs 15,000 price tag. It will support the 4G network band. According to the company, the MediaTek Helio G37 SoC, the 50MP primary camera, the 90Hz screen refresh rate, and the newest version of the Android operating system will be the main attractions of the upcoming affordable smartphone.

Motorola has been making smartphones for many years now, back to when it first launched phones with flip covers in 2005. Motorola was one of few companies that saw the need for a smartphone that wasn’t just “another iPhone” or “another Samsung,” but something unique and different — something you could call your own. This year they’ve lived up to their promise with Moto G22, which has excellent features like a 90Hz display and 50MP camera for under Rs 15k price point!

Let’s look at the Moto G22’s characteristics, pricing, and availability before the phone makes its official debut on the market.

With its oval-shaped back camera hump, the Moto G22 has a little bit of an edge. It also has a punch-hole screen, fingerprint sensor, and water-repellent coating on the outside.

Under the hood, a MediaTek Helio G37 CPU works together with 4GB of RAM and 64GB of internal storage, which is further expandable up to 1TB through a microSD card. The 6.5-inch Max Vision IPS LCD has an HD+ screen resolution and a refresh rate of 90Hz.

The smartphone comes in both black and blue, but it’s what’s on the inside that counts: four cameras—a 50MP primary camera with Quad Pixel technology; an 8MP ultra-wide lens with a field of view of 118 degrees; a 2MP depth sensor; and a 2MP macro camera—as well as a 16MP selfie camera on the front.

A 5,000mAh battery that can only handle 20W TurboPower Charge powers the smartphone. It runs on Android 12, which is almost stock, and it has Business Grade security thanks to ThinkShield. Furthermore, there is support for a side-mounted fingerprint scanner and Face Unlock, among other technologies.

The Moto G22 will soon be live on purchase, and there are many options for you to save on your new phone.

For a limited time, you can get the Moto G22 for as low as Rs 9,999—that’s a 10 percent discount! You’ll have to use your ICICI Bank credit or debit card to get this discount. The deal will be available from April 13 to April 14.

If you don’t have an ICICI Bank credit or debit card, you can use any other form of payment and still get a 5 percent cash back if you pay with your Flipkart Axis Bank Card. There’s also a 0% EMI option.

There’s more! If you buy the Moto G22 between April 13 and April 14, you’ll also be entered into a raffle to win a 2nd-Gen Google Nest Hub for just Rs 4,999. And if that’s not enough, there’s another Rs 2,000 discount when you make your next Flipkart purchase.

The Moto G22 is initially available in two colors: Iceberg Blue and Cosmic Black. But soon, it will be available in Mint Green as well!