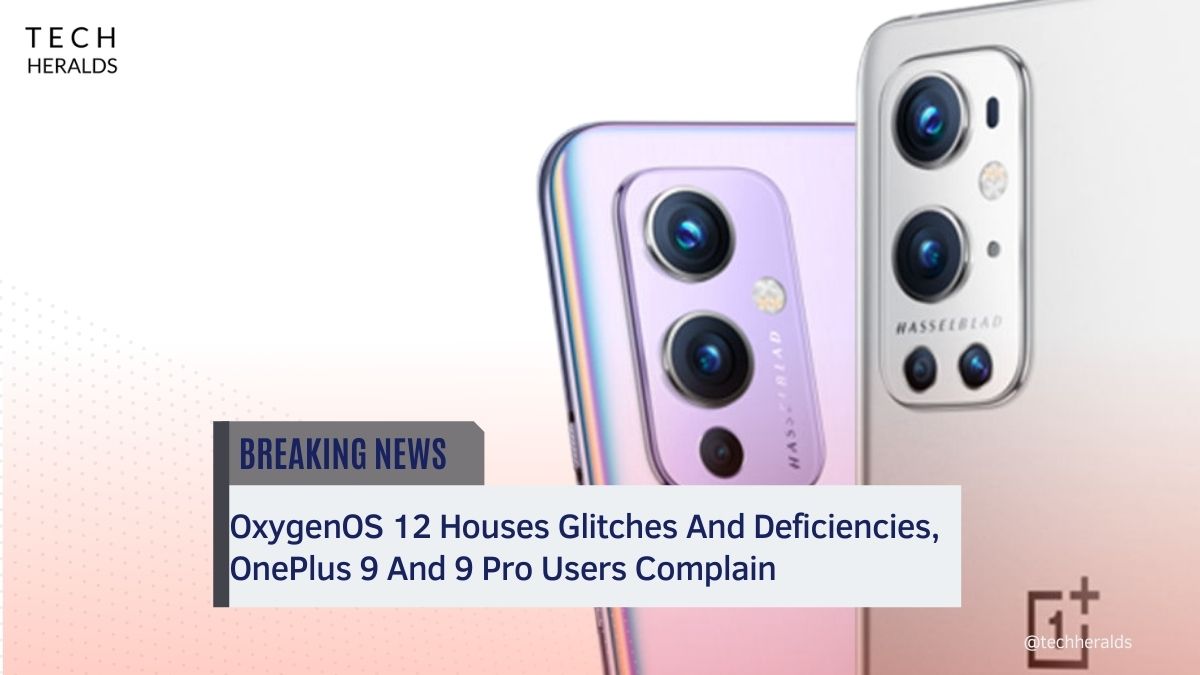 OnePlus has rolled out OxygenOS 12 based on Android 12 for its OnePlus nine lineup. Receiving an OS update is no less than the experience of using a brand new phone. However, OxygenOS 12 seems to be filled with glitches and deficiencies. OnePlus 9 and 9 Pro users questioned the company through social media platforms if OxygenOS 12 was even stable or not.

After the internet giant Google launched Android 12 and provided the latest operating system on its Pixel phones, OnePlus was the quickest to develop an operating system powered by Android 12. The company said in a statement that it has rolled out OxygenOS 12, and some OnePlus users had been already using it. The tech company added further that the OxygenOS 12 update would be rolled out extensively.

OnePlus, in the past, too, had to face criticism when it developed OxygenOs 11 for OnePlus eight and OnePlus 8 Pro. Beta users who had installed OxygenOS 11 reported auto data deletion from their phones. Also, the people who had kept auto-update turned on had no option but to install the buggy OS. Most of them, too, had complained about their data deletion from the phone.

OnePlus nine and OnePlus 9 Pro users reported issues about the OS update, such as issues in receiving and making calls, slow Wi-Fi speed, poor animations, and not so well functioning autofill features. Apart from the glitches, there were plenty of features that OxygenOS 12 does not include personalization features such as no option to use custom icons, battery Icon can not be hidden, no chance to personalize status bar, and Google feed can not be disabled. Nor The OxygenOS 12 has an inbuilt feature to record voice calls and an Advanced reboot feature.

On the other hand, OnePlus has brought new features to the OxygenOS 12, such as adjustable dark mode, improved icons, Work-Life Balance 2 and facelifted shelf.

Here are a few tweets from the OnePlus nine and OnePlus 9 Pro users who shared their opinions about the all-new OxygenOS 12:

‘The OxygenOS 12 carries numerous buggs, the most serious of all this is that if you did not have the phone app on your home screen just before to the update, you will not be able to physically find it anywhere on your phone (not even in the app manager). You will have to open this from the Play store at all times. The icon box in customization crashes often, you are unable to view Google Feed for the majority of the time, all permissions have been reset, and the recents menu is one of the worst you will ever see on a phone in its current state. It’s buggy, and it’s not worth your time.’ said Amankirti Walde, a writer and poet by profession.

‘I’m completely disgusted. After choosing the close all button in task manager, the last used application still appears on the screen, implying that task manager is unable to shut all applications. Whatsapp parallel is unable to connect to the internet. There is no call recording application. I miss my previous phone and the contacts app on my phone.’ says M Khan.