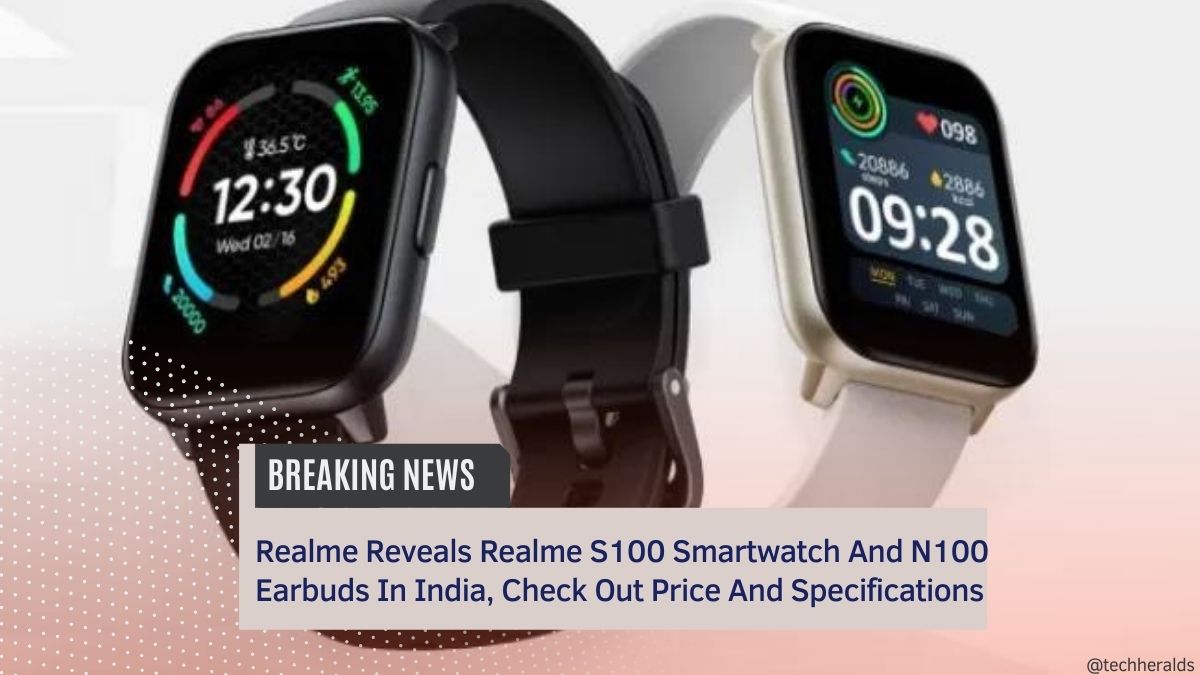 In celebration of its Realme 9 SE smartphone launch, Realme India had a press conference today. On the other hand, the event itself was not the primary focus of attention. At the same event, which took place today, Realme India announced the launch of two new wearable devices from the mobile manufacturer for the Indian market.

As part of the company’s TechLife brand, the Realme TechLife Watch S100 wristwatch and the Realme TechLife Buds N100 wireless headphones have been launched in India. Because both of the brand’s wearable items are priced at INR 3,000, they are pretty affordable for customers.

The TechLife Watch S100 wristwatch’s design includes a water-resistant frame and a colour display. Battery life is 12 days on a single charge, and the S100 smartwatch may be recharged many times. Anyone interested in acquiring a new watch from the Realme brand will find this to be an excellent cost-effective solution. Colour options available for the watch include blue, green and black.

The TechLife Buds N100 are a pair of Bluetooth headphones in the manner of a neckband with an in-line microphone and a battery life of up to 17 hours. It should be noted that this is a very reasonable choice for individuals who like to buy Bluetooth headphones from the company’s range of goods again.

The watch is easily understandable with a 1.69-inch display with a resolution of 280×240 pixels and a maximum brightness of 530 nits. The screen’s touch sensitivity is supported by an operating system that can be manually upgraded using the company’s official app, which is available for Android 5.0 and above or iOS 11 and higher.

The watch is powered by a Qualcomm Snapdragon 430 processor and has three-axis accelerometers to track physical activity. The Snapdragon 430 chip enables the gadget to track steps, calculate calories burnt, estimate distance travelled, monitor sleep quality, and measure heart rate, among other functions. With a Bluetooth v5.1 connection and 24 sports modes. The Realme S100 smartwatch may be used for various activities such as dance, bicycling, running, and other sports, among other things.

Internally, the watch is powered by a single battery, a 260mAh unit capable of supporting all of its functions. According to the maker, it has a battery life of up to 12 days on a single charge and may be used for several purposes.

The IP68 certification for water resistance is standard with the watch. In conjunction with its smartphone companion app (available for Android 5.0 or iOS 11), customers may make use of a variety of extra functionalities.

The Realme TechLife Buds N100 are a set of Bluetooth earphones with a neckband design that is ideal for wearing around the neck. Among other things, it includes an IPX4 water resistance certification and Bluetooth v5.2 compatibility. It is packed with dynamic bass drivers with a 9.2mm diameter and housed in aluminium sound chambers, which provide a robust bass response.

Also, as an additional advantage, using the magnetic Bluetooth Connection feature on the earphones, you may quickly and conveniently disconnect them by just joining them together.

According to the business, depending on the model, the earbuds may give users up to 17 hours of music listening time on a single charge.

According to an earlier statement from Realme, both devices will be available for purchase on March 14th and 15th, respectively, on Flipkart, Realme.com, and a limited number of physical outlets.