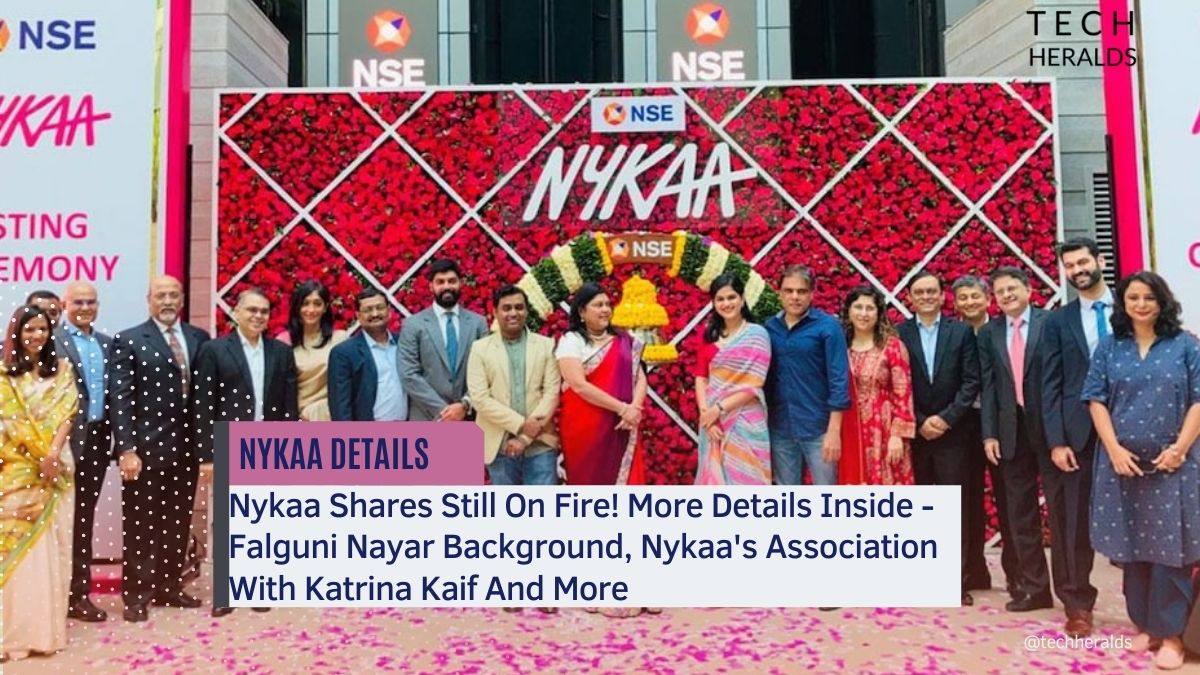 Nykaa shares received an unprecedented welcome on Stock Market. The fashion and personal care segment company debuted on the Bombay Stock Exchange and National Stock Exchange on 10 November with a 96 percent premium to its face value set at Rs 1125 apiece.

Nykaa had opened up its three-day-long Initial Public Offering (IPO) for its shares on 28 October 2021. As per the data published on BSE, the share allotment reserved for Non-Institutional Buyers (NIB)/ witnessed a subscription of 112 times, while the fraction of Nykaa shares reserved for Qualified Institutional Buyers received a subscription of 91.8 times. Also, employees subscribed to the Nykaa shares reserved for employees 1.88 times. Before the official listing of Nykaa on the stock exchange, it was also trading in Grey Market with a premium of Rs 570.

Cosmetics and personal care had remained an undervalued industry, albeit with 20 percent contributions to the e-commerce sector. With the launch of Nykaa, Falguni Nayar has endeavored into something that was neglected or, say, something that was given less importance.

Make-up is not just a means for looking presentable but also a way of wearing your opinion. Falguni Nayar has, therefore, facilitated India’s populace a medium to find beauty and personal care products regardless of their gender. Nykaa has more than 1.8 million products on the platforms, including various premium to mid-range brands. Nykaa also manufactures some beauty products under its label.

Falguni Nayar founded Nykaa in 2012 on a bootstrapped basis. In an interview three years ago, she said that it was not difficult for her to explore funding opportunities. Still, she wanted to carve a unique identity of Nykaa before she would decide to approach the investors.

For the first two years, Falguni Nayar and her husband bore the company expenses on their savings. Falguni Nayar managed to bring substantial growth to Nykaa by the end of the second year.

Nykaa bagged its first investment from angel investors two years later, in 2014. The series A round of funding fetched Rs 20 crore to the company. Some of the early investors in Nykaa included Indra Banga and Harindarpal Singh Banga. The market valuation of Nykaa after receiving the first investment has touched Rs 120 crore. Nykaa shares price was Rs 97.4 apiece.

A year later, in July 2015, Nykaa received another Rs 59.6 crore in funding from TVS Capital, heightening the company valuation to Rs 500.7 crore.

After a gap of four years, the company managed to bag Rs 100 crore in a Series E round of funding. The market capitalization of Nykaa at that time was inflated to Rs 5,713 crore. TPG Growth was the leading investor in Nykaa in the Series E funding round in March 2019. Nykaa shares price in 2019 March was Rs 3,530 apiece.

Nykaa, in March 2020, had a moment to celebrate when it turned into a unicorn company. Nykaa received Rs 166.6 crore in funding from Steadview Capital in a Series E3 round. After the E3 round of funding, the total market capitalization of Nykaa had settled to Rs 10,140 crore.

Nykaa has shown tremendous growth in a short period. For some time, the company had reported a loss during the corona pandemic. But Nykaa managed to scale up its growth rapidly in the post-pandemic time.

According to the close observers of the online shopping platform, tire II and III cities are playing a seminal role in boosting the company’s profit chart. Nykaa has also published a report stating tier II and III towns have contributed 64 percent of their revenue in 2021 compared to 59 percent in 2020. While the share price of Nykaa increase to Rs 6,569.

Followed by the constant growth in Nykaa, the networth of Falguni Nayar has also increased to $7.4 billion over time. She is also counted in the top 20 richest Indian billionaires.

Who Is Falguni Nayar?

Falguni Nayar is an Indian Institute of Management Ahmedabad alumni working as a banker before she founded Nykaa – a content-based e-commerce platform founded in 2012. She spent a significant part of her career working in Kotak Mahindra Capital Co. She was also deployed in the bank as the managing director and was leading institutional equity business. Falguni Nayar hails from Gujrat. Her father owned a bearings firm.

How is Katrina Kaif associated with Nykaa?

Katrina Kaif’s presence in Nykaa’s stock market bell-ringing event was confusing for many people. For the uninitiated, Katrina Kaif has a tie-up with Nykaa and is one of the company’s investors.

Nykaa, in association with Katrina Kaif, has formed a beauty brand called Kay Beauty. Katrina Kaif is the co-owner of Kay Beauty and plays an instrumental role in branding and formulating growth strategies.

Speaking to NDTV about Katrina Kaif’s presence to the bell ringing event, Falguni Nayar said: “Conjointly with Katrina Kaif, we own a brand called Kay Beauty. It is a brand that we founded together and she has helped us significantly in building the brand. She is co-owner and also designed the brand we are building together. She is a business partner of Nykaa and so she was here today.

Alia Bhat, Bollywood actress and daughter of Mahesh Bhatt, is also an investor in Nykaa.

Should you invest in Nykaa Shares?

Nykaa is a content-based e-commerce platform that deals in cosmetics and personal care products; some of them are self-manufactured by Nykaa.

Brokerages gave a positive response to Nykaa’s stock listing and suggested subscribing to the stock. Santosh Meena, head of research at Swastika, commented on Nykaa’s long-term performance of the stock exchange: we expect a surge in Nykaa’s stock for the next 1 2 days. Then it might settle down for some time. Nevertheless, Rs 2000 could perform as a support level in the near future. Aggressive investors can hold the stock for the long term, he suggested further.

What does Nykaa mean?

Nykaa is the word derived from its Sanskrit namesake ‘Nayaka,’ which means a heroine, or the one becomes a center of attraction.