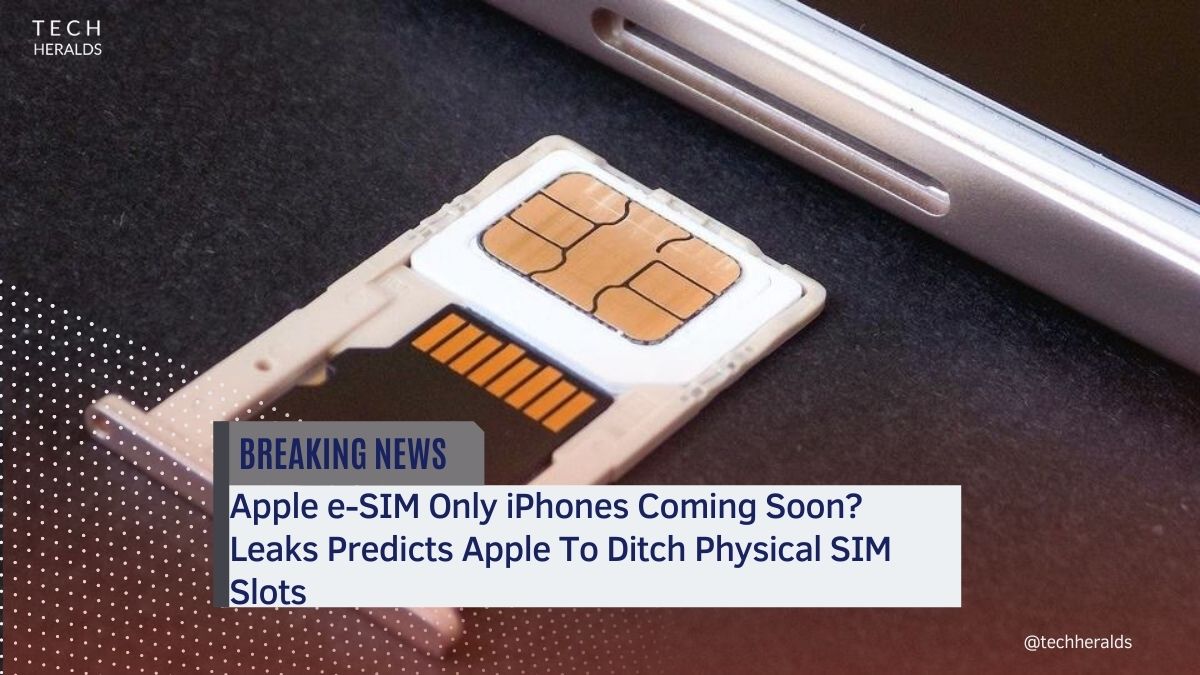 Apple e-SIM iPhones could be a reality soon! Recent leaks strongly point towards Apple ditching the traditional SIM slots in its upcoming smartphones. Leaks and rumours revolving around Apple devices circulating on the internet are not new. A heap of rumours from various sources, some genuine and mostly fake, keeps popping up every day for the entertainment of the tech-savvy readers. Apple iPhone 14 is still not launched, but rumours about the features and specifications of the Apple iPhone 15 have already grabbed everyone’s attention.

Recently, a leak from a notable tweeter user with an internet name ‘blogdoiphone’ notified the tweeter users that iPhone 15 Pro might not have SIM trays for accommodating the physical SIMs. However, another recent tweet from MacRumors suggests that the Apple fans would not have to wait until the launch of the iPhone 15 because the company has plans to abandon physical SIM trays from the iPhone 14 itself, which would be the earlier variant of iPhone 15 launching around September month of 2022.

Apple recently asked the United States telecom operators to be ready for e-sim specific smartphones. Apple’s advice to the telecom operators has hinted that the Cupertino based tech company is fast moving towards e-sim technology. Apple’s unprecedented emphasis on the Apple e-SIM smartphone has given rise to the speculations that Apple might introduce the only e-SIM variant of iPhone 13.

As part of their preparations for the changeover, several U.S. carriers are also preparing to sell the iPhone 13 series smartphones with just e-SIM support starting in the second quarter of 2022, as reported by Bloomberg. Only by the end of 2022 is it possible that e-SIMs will become the primary mode of mobile network access.

Apple e-SIM technology has been a part of iPhones since 2018. Smartphones launched in and after 2018 come with dual sim support, including one physical SIM and the other is e-SIM.

What is Apple e-SIM?

Apple e-SIM is a digital version of the physical SIMs ( Subscriber Identity Modul) that does not need a physical card inside smart devices such as phones and watches. E-SIMs allow the users to choose connectivity services from various telecom operators without inserting the physical SIM into the devices. Users will need to request the telecom operators of their choice to send them e-SIM profiles virtually.

Apple e-SIM will vacate the space that usually physical SIM slots occupy. The vacated space can be used for installing the additional components inside the smart devices that would provide extra features. In another case, the freed up space can be utilized to enlarge the battery size. E-sim technology will help smartphones to be more water-proof. e-SIM technology will help track down lost or stolen smart devices as the e-sim app will not uninstall.

You’ll have to contact the telecom company stores every time you upgrade your mobile because there isn’t a physical card present.