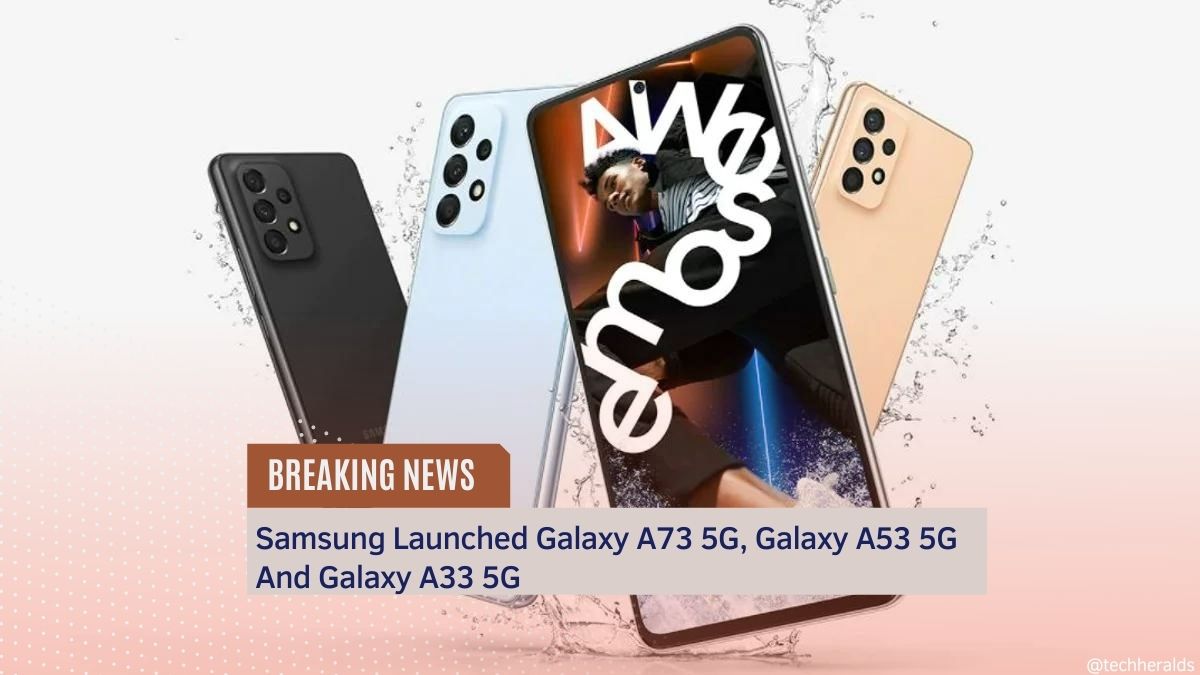 Samsung announced five new 5G smartphones in India, which the company describes as its “most inventive.” The Samsung Galaxy A13, Galaxy A23, Galaxy A33 5G, Galaxy A53 5G, and Samsung Galaxy A73 5G are among the devices. It is expected to be available in India within two weeks, according to the firm.

The firm says that these gadgets will replace their predecessors from last year: the Galaxy A12, Galaxy A22, Galaxy A32, Galaxy A52, and A72. The new phones feature a bold design and bring Samsung’s innovation to a more affordable price point than ever before. All of the phones in the series are designed to be versatile, adaptable, and powerful.

According to Raju Pullan, Senior Vice President of Samsung India’s mobile business division, “At Samsung, we recognize the importance of openness, and the Galaxy experience is the force that drives unlimited possibilities. The Galaxy A series exemplifies this notion by bringing flagship-level features to a more affordable price point than ever before. Designed to excite customers with their design, power, and adaptability, the five new models we are releasing are fabulous.”

Let’s have a look at their specifications.

The Galaxy A73 5G, is a 6.7-inch FHD+ Infinity-O Super AMOLED+ phone that comes with Corning Gorilla Glass 5 protection on the front and back. It has an IP67 certification that makes it water-resistant. The Qualcomm Snapdragon 778G 5G system-on-chip powers the device and it has 8GB of RAM and up to 16GB of extendable RAM.

The Galaxy A73 5G has a 5,000mAh battery with 25W fast charging and up to 256GB of built-in storage that can be expanded even further with the use of a microSD card with a capacity of up to 1TB.

As far as the cameras are concerned, the Samsung Galaxy A73 5G on the rear packs a 108-megapixel primary camera enabled with optical image stabilization; a second 12-megapixel camera, a third 5-megapixel depth sensor camera, and the fourth is a 5-megapixel macro camera. The autofocus feature is available on the rear camera configuration. In the front, there’s a 32MP camera with an f/2.0 aperture for taking selfies, and it comes with a slew of photo-editing tools as well.

The Samsung Galaxy A53 5G is equipped with a 6.5-inch Super AMOLED display with a 120Hz refresh rate, Corning Gorilla Glass protection, and IP67 dust and water-resistant coating. It’s powered by an Exynos 1280 chip paired with up to 8GB of RAM and 128GB of storage space. It runs on a 5000mAh battery that is 25W fast charging.

With a 64MP primary camera with optical image stabilization (OIS), as well as a 12MP camera and two 5MP cameras, the Samsung Galaxy A53 5G has a comprehensive camera configuration on the back of the phone. On the front, there’s a 13-megapixel selfie camera as well.

Samsung will provide software upgrades for up to four years and security patches for up to five years, so you’ll never have to worry about updating your phone again!

Samsung’s Galaxy A33 5G smartphone has a 6.4-inch FHD+ Super AMOLED display with a screen refresh rate of 90Hz, and it is powered by the Exynos 1280 system-on-chip.

For the Galaxy A33 5G, Samsung has also committed to providing software upgrades for up to three years and security patches for up to four years.

The Samsung Galaxy A73 5G will be available in mint, grey, and white. Its price has not yet been announced but it will be available for pre-order soon on Samsung.com, prominent retail outlets, and select online portals.

The Samsung Galaxy A53 5G, Galaxy A33 5G, Galaxy A23, and Galaxy A13 will each be available in India in four different colors: peach, blue, black, and white. Although the company has not yet announced the exact date of availability, the phone will be available soon.