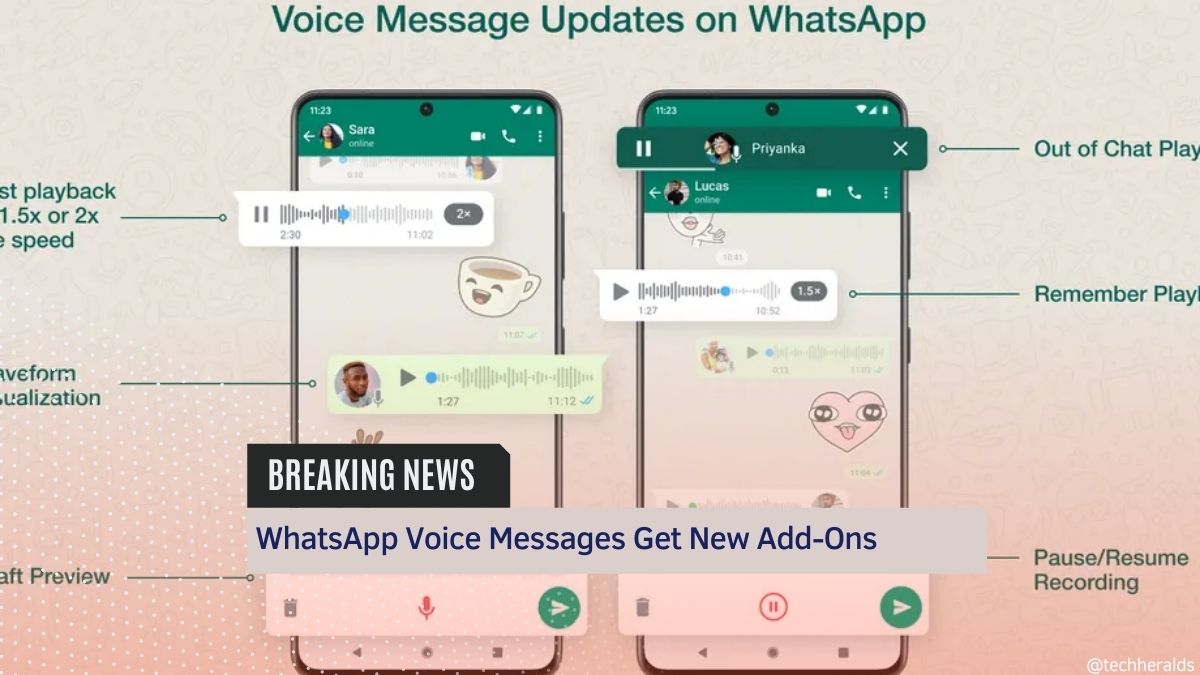 WhatsApp has announced that it is rolling out several new features to improve the WhatsApp voice messages feature on its platform. The company released a statement on Wednesday, stating that the new features will be introduced on all Android and iOS devices over the next few weeks.

The WhatsApp voice messages feature was initially released in 2013, and the instant messaging service has been progressively upgrading the experience since then. The platform claims that it exchanges more than 7 billion voice messages per day on its network, making it one of the most popular voice communication services available.

WhatsApp announced the new capabilities earlier this week, and they will be rolled out to all Android and iOS users in the coming weeks. To use it, users will have to open an existing conversation and tap on the microphone icon at the bottom of their screen. After recording their message, they can either press send or hold down the record again and release to send their message with a quick swipe.

New features add to the convenience of WhatsApp voice messages.

Out Of Chat Playback: You can play and pause the message as needed—for instance, if you’re interrupted while listening to an important message, you can pause it and resume where you left off later. This is available both in the chat window and out of it, so you can read other messages while listening to a voice recording.

Fast Forwarding: You can now listen to voice messages at 1.5x or 2x speed, both on your messages and forwarded ones. This feature is useful if you’re in a hurry but still want to listen to the content of the messages.

Pause Recording: The ability to stop and restart a voice message recording has also been added. It allows you to halt the recording and continue it when you’re finished, which is useful if you’re interrupted or need to collect your thoughts.

Voice Preview: Before sending your voice messages, you will be able to listen to them as a draft. The preview feature will help you to make sure your messages are clear, a waveform visualization is available that displays a visual representation of the sound of the voice message.

Playback Restarts At Where You Left: If you pause while listening to a voice message, you will be able to pick up where you left off when you return to the conversation.

Additional Features The Are Coming Soon On The App

WhatsApp has just released several new features, including a multi-device login for WhatsApp Web, as well as a contact page for WhatsApp Business users. The majority of these capabilities have been available in the beta version for quite some time, and WhatsApp has now completed the final adjustments to the software. These functionalities will be made available in a stable form via the use of an over-the-air (OTA) update.

WhatsApp has also been experimenting with a few features that make it seem more similar to Facebook. The firm, which is owned by Meta, is now testing a new contacts page for WhatsApp Business clients. The function has a similar appearance to Facebook cover pics. The functionality may be added to the normal version of WhatsApp as well.