The Samsung Galaxy A03 Launched In 10K Price Range, See Phone Specifications And Other Details 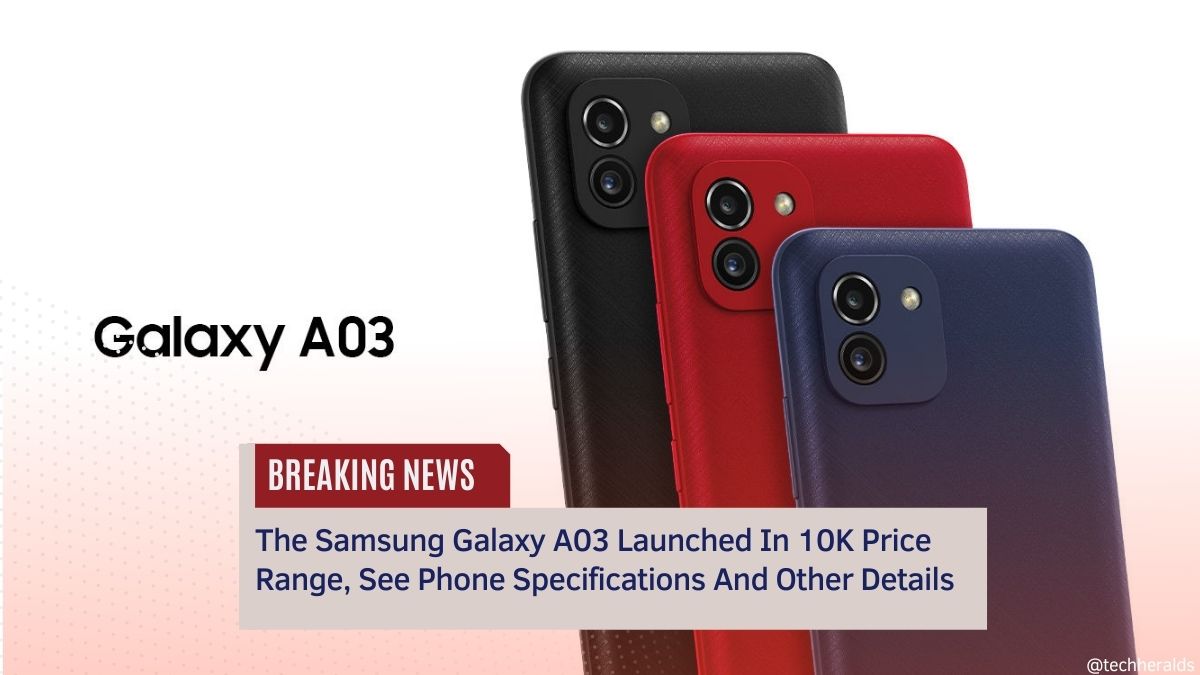 Samsung has launched another entry-level smartphone in its portfolio in India. The Samsung Galaxy A03 is the company’s latest entry into the A series, which is a line that targets explicitly the low-budget Indian market. With the release of the Samsung Galaxy A03 in India, the company introduces its first model of its 2022 A series smartphones.. Samsung had previously launched two other smartphones in the A series; A03s and A03 Core.

The Samsung Galaxy A03 sits in the 10 thousand price range and will face off with rival smartphones such as Redmi 9i, Redmi Prime, and Motorola E7. Let’s look at the phone specifications to help you form a clear opinion.

The Samsung Galaxy A03 Specifications

Samsung is expanding its Galaxy A series to launch a new model called the Galaxy A03. The smartphone features a 6.5-inch TFT display with an HD resolution of 720 x 1600, a waterdrop notch on top of which is the 5MP camera for capturing selfies. The display has a 20:9 aspect ratio and 270 pixels per inch density.

This device comes with an octa-core UNISOC T606 processor that runs at a maximum speed of 1.6GHz and can support up to 4GB of RAM to ensure that performance is smooth. The chipset is built on 12nm technology and integrated with Mali G57 MP1 to fulfill graphics needs. With 64GB of internal storage, you’ll have plenty of room for your files and media collection — and if you need more space, there’s a microSD card slot to add up to 1TB more!

On the rear of the phone is a dual camera setup, with the primary sensor consisting of a 48 MP sensor and the depth sensor having a resolution of 2MP. It comes with a 5MP front camera that comes with image enhancement features such as Beauty Mode, Smart Selfie Angle, and Live Focus, which will make it easier for users to take selfies. Videos on the Samsung Galaxy A03 smartphone can be recorded at 30 fps.

The device will ship with a battery capacity of 5,000mAh, so you can go days without needing to recharge your phone. It also supports Dolby Atmos audio… but only through headsets at this time.

You get One UI 3.1 Core, Samsung’s modified version of Android 11, out of the box on the software front. The Galaxy A03 also supports Dolby Atmos audio enhancements for music, movies, and games on supported headphones. The phone has space for two Nano sim cards and a dedicated slot for a MicroSD card.

Connectivity features include Bluetooth, WiFi, Hotspot, GPS, micro USB 2.0, and 3.5mm audio jack for wired earphones. Only the minus side of the Galaxy A03 lacks a fingerprint sensor, which is considered a fundamental feature of smartphones nowadays.

The Samsung Galaxy A03 Price In India

The Samsung Galaxy A03 comes in two configurations: 3GB+32GB and 4GB+64GB. The base variant is priced at Rs 10,499, while the latter will cost you Rs 11,999. As far as color options are concerned, three color options are on offer – Red, Blue, and Black. The phone can be purchased on Samsung’s official site for India, Amazon and Flipkart.