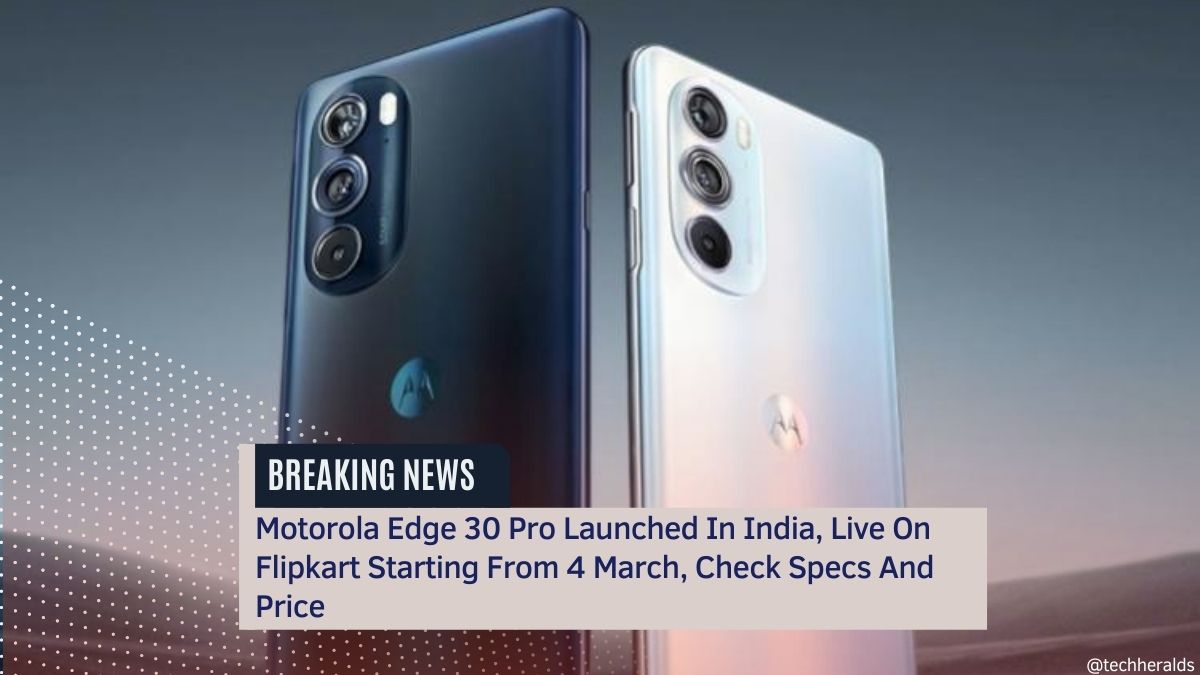 Motorola has announced its Motorola Edge 30 Pro, a global version of its Edge X30 smartphone. The smartphone was launched in China last year as the Edge X30, and at the time, the company said it would launch in other markets with a different name.

When it launched in China, Motorola debuted a variant of its flagship phone that had an under-display selfie camera. However, that variant has not yet found its way to the global markets. The Edge 30 Pro is among the first smartphones with Snapdragon 8 Gen 1 SoC. And a general uplift in performance and power efficiency. Alongside this upgrade, Motorola has added an advanced depth-sensing camera for facial recognition and improved portrait mode photos on both front and rear cameras.

The device’s strong point is undoubtedly its 60 MP (f / 2.2) punch-hole selfie camera on the show that makes taking selfies far more manageable than competing phones with punch-hole front cameras like those from Vivo or OPPO.

With the Motorola Edge 30 Pro, Motorola offers a re-designed device with a beautiful new 6.7-inch Full-HD+ display, though they’re sacrificing it for a pill-shaped camera module. The screen supports a 2400 x 1080p resolution, 10-bit color, and HDR10 + certification. RAM options varying up to 12GB and ROM up to 256GB will be mated with Snapdragon Qualcomm 8 Gen SoC.

The front and rear part of the Motorola edge 30 Pro Motion includes corning gorilla protection, jumping on Victus GG protection, also for the beautiful display. The Motorola Edge 30 Pro comes with a 4,800mAh battery and supports fast charging up to 68W (or 30W, varies by slot) via a USB Type-C port. It also supports 15W wireless charging, which is great to see on a Motorola flagship.

The Motorola Edge 30 Pro weighs 179 grams and is 8.79mm thick. It has everything you could want and more, including Wi-Fi 6e, USB-C port (USB 3.1 compatible), NFC, DualSim cards, Bluetooth 5.2, and more. Supports Dolby Atmos audio output via Dolby Digital Plus tuning.

The side-mounted fingerprint scanner quickly reacts and ensures your device stays safe from prying eyes. You can use the three mics for noise cancellation in loud environments. The smartphone runs near-stock Android 12 with Motorola’s My UX 3.0 skin on top. It is available in two color options: Cosmos blue and white Stardust.

The Motorola Edge 30 Pro is priced at Rs 44,999 in India and is exclusively sold via Flipkart. It will start shipping on 4th March. This price includes a Rs 5,000 discount for SBI card users. Once the promotional period ends, the cost of the device will go up to Rs 49,999.