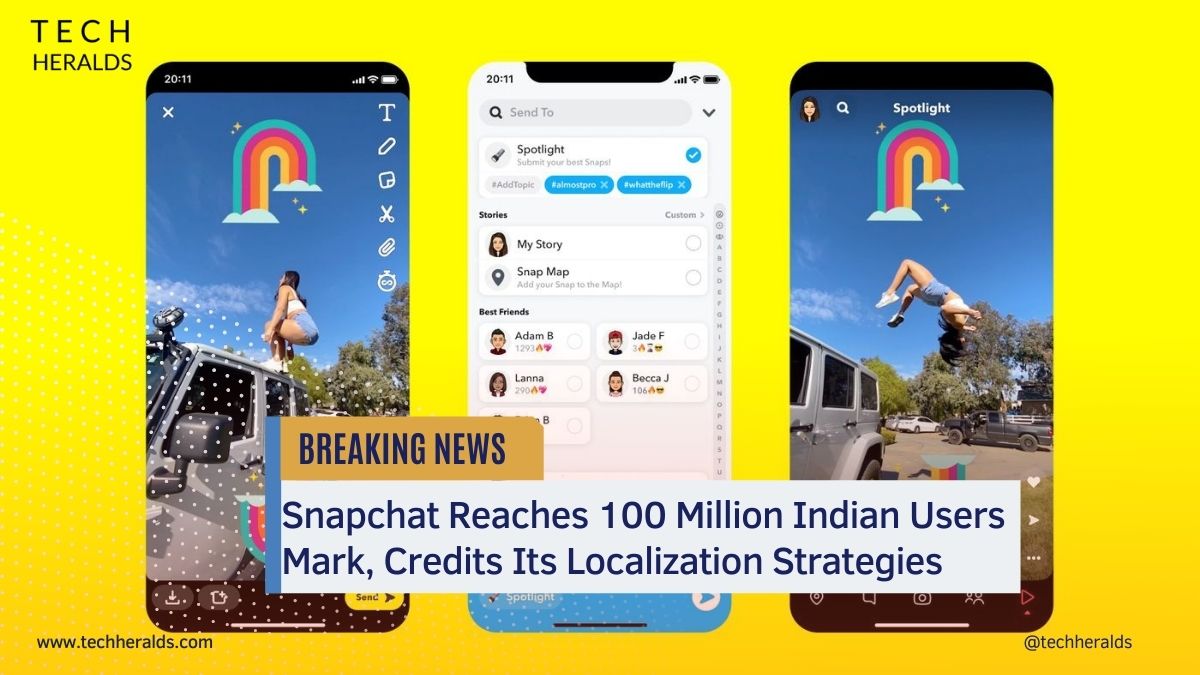 Evan Spiegel, Chief Executive Officer (CEO) and Co-founder of Snap Inc, declared hitting 100 million monthly active Snapchat users in India. Evan spoke at a virtual second edition of the Snap For India conference held on Wednesday and further attributed the milestone of the 100 million active users to its localization strategies in India to reinvigorate its existence.

The announcement of touching 100 million milestone comes from Evan Spiegel just a couple of weeks after the Indian arm of Snapchat found planning and plotting new strategies to bolster its presence in the Indian market.

Snap chat, the subsidiary of Snap Inc., is better known for its wide range of Augmented Reality filters, vanishing messages, and stories. Still, it has been adding many new features to both android and iOS apps. Snap chat rolled out the spotlight feature, a scrollable short videos section like Instagram Reels, TikTok, and YouTube Shorts, considering the shift of people from traditional photos to short and scrollable videos. Snapchat claims a 4X increase in average time spent on the app since the introduction of the spotlight feature and a 70 percent increase in net new advertisers.

The camera app has partnered with the vernacular channels and content creators to retain the surplus engagement time and advertisers. Currently, 70 local channels are offering their content to snap chat users, and the company is now planning to add another 120 episodes in 2022. The newly added episodes will be comprising fitness, fashion, entertainment, news, and comedy categories. The USA-based firm has partnered with many leading television channels, including Zee TV and Song Television.

Snapchat has declared the collaboration with e-commerce giant Flipkart to integrate its Artificial Intelligence-powered camera with Flipkart. The integration of AI technology with the e-commerce platform will enhance the shopping experience. According to the collaboration, Snapchat is extending its Camera Kit to power the Camera Storefront feature of Flipkart that enables the customers to virtually try the products such as Clothes and Spectaculars.

Snap Inc., the parent company for Snapchat, is also partnering up food delivery app Zomato to enable the snap chat users to order food without leaving the app. The users on snap chat will be able to access restaurants information with the help of Snap Map.

Along with that, Snap Inc. has also tied up with cosmetic manufacturer Sugar Cosmetics and beauty products firm MyGlamm to offer its users a virtual try-on feature.

Evan Spiegel stated in the virtual summit that Snap Inc. has made substantial investments in localizing the Snapchat app for Indian users. He further said they have infused culturally applicable content in the application, developed vigorously active and productive indigenous creator communities, and invested in local products, language support, and marketing drives.

Snapchat is also extensively focusing on furthering its reach to an enormous number of users by using its off-Snapchat OEM strategy to deliver its AR-powered camera filters, specifically called lenses, without needing the app’s presence.

Samsung was the early adapter of Snapchat’s AI-powered lense to its native camera application. Other than Samsung, the AI-Powered lenses are also integrated into Google Pixel 6 series and Jio Phone Next.