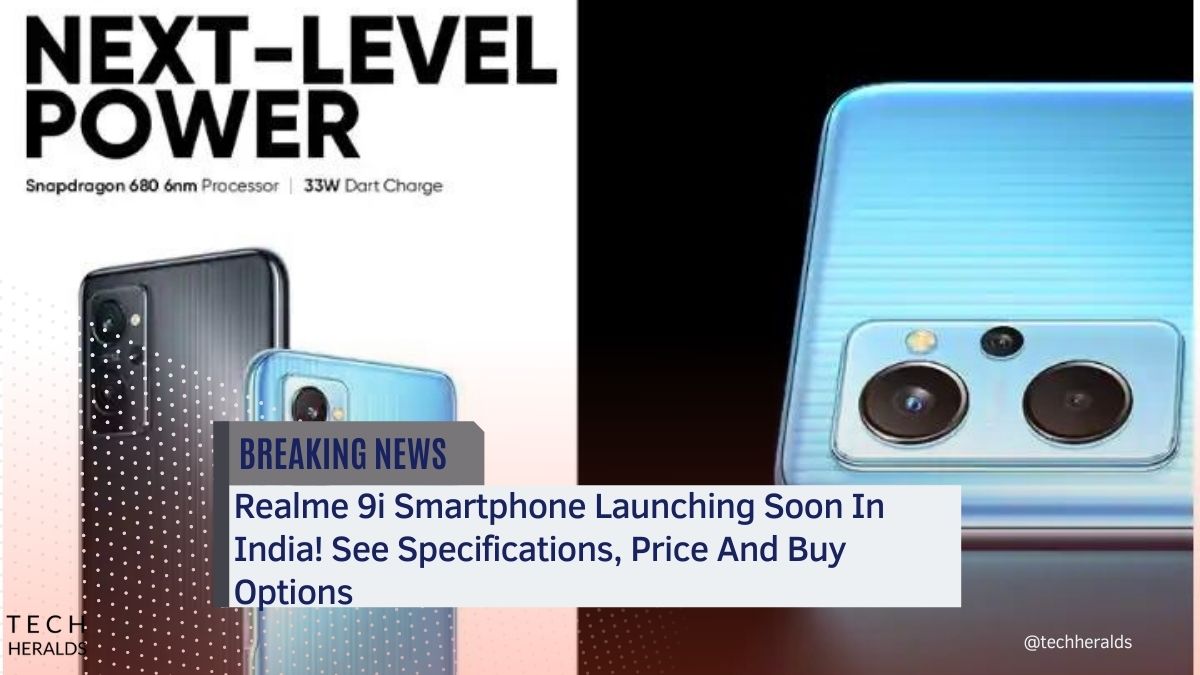 Shenzen, China-based smartphone manufacturer Realme, is launching the Realme 9i smartphone in India very soon. The successor of the tech company’s existing phone, Realme 8i, comes with facelifted design, fast charging support and a better processor for better performance. Realme has also included dual speakers in the upcoming Realme 9i smartphone, which was missing in the previous version of the I series. There have not been major changes in the price similarity of the two devices. The upcoming Reami 9i will be priced at Rs 13,999 for 3Gb RAM + 64GB storage and Rs 15,999 for 6GB RAM and 128GB storage.

When Realme 9i Smartphone Will Launch In India?

Realme 9i smartphone will be available on sale starting from 25 January 2022. One can purchase the smartphone on Flipkart.com and Realme.com. The smartphone manufacturing company promulgated the early sale of Realme 9i commencing on 22 January. However, the stock availability will be limited. Like the Realme 8i, the successor will also come with 6.6-inch screen size.

Moreover, the screen resolution will be the same as Relme 8i, which is 1080p. Talking about the screen refresh rate, there is a reduction in the refresh rate. The tech company has offered only a 90Hz refresh rate compared to the 120Hz shown in the Realme 8i.

The truth that the Realme 9i smartphone does not become as luminous as the 8i is the true disappointment, though. Realme claims that the Dragon Trail Pro glass is used in the 9i smartphone. The Redmi Note 10S, on the other hand, can become even bright as the brand has deployed an AMOLED screen.

The Realme 9i smartphone is backed by a Qualcomm Snapdragon 680 processor built over a 6nm technology. Upgradation in the processor is a significant improvement over Helio G96-based 8i, made on a 12nm technology. Realme 9i is available in up to 6GB of RAM and 128GB of UFS2.2 storage configurations.

Even from the camera setup perspective, the upcoming Realme 9i smartphone resembles the Realme 8i. Thus, the Realms 9i will also have a triple rear camera setup. The camera setup will consist of a 50MP primary lens and 2MP Macro sensor, and 2MP depth sensor. For selfies and video calling, the front upper bottom of the smartphone holds a 16MP selfie camera. Realme utilizes the same Sony IMX471 sensor that OnePlus used in the OnePlus 9RT, which sells for more than Rs 40,000 and is exclusively available in India.

The fingerprint scanner is given on the side of the Realme 9i smartphone. The biometric sensor has pretty well accuracy. The earpiece also functions as an extra speaker, which is a feature offered by the Chinese brand. Realme 9i runs on Realme 2.0 User Interface on top of Android 11. Although, several newly launching phones in this price range are now widely using the advanced version of Android, which is Android 12.

When it comes to battery longevity, the Realme 9i smartphone has a massive 5,000mAh capacity, which is commonly used in the mid-ranged phones category. The 8i likewise housed a 5,000mAh battery. However, whereas it had a maximum charging power of 18W, the Realme 9i had a maximum of 33W. Realme includes a charger that is compatible with the regulations.

Also Read: Xiaomi 11i HyperCharge And 11i Launched In India, Company Claims To Be The Fastest Charging Phone