Bitcoin Receives The Taproot Update After A Gap Of 4 Years, Will Enhance Privacy And Security 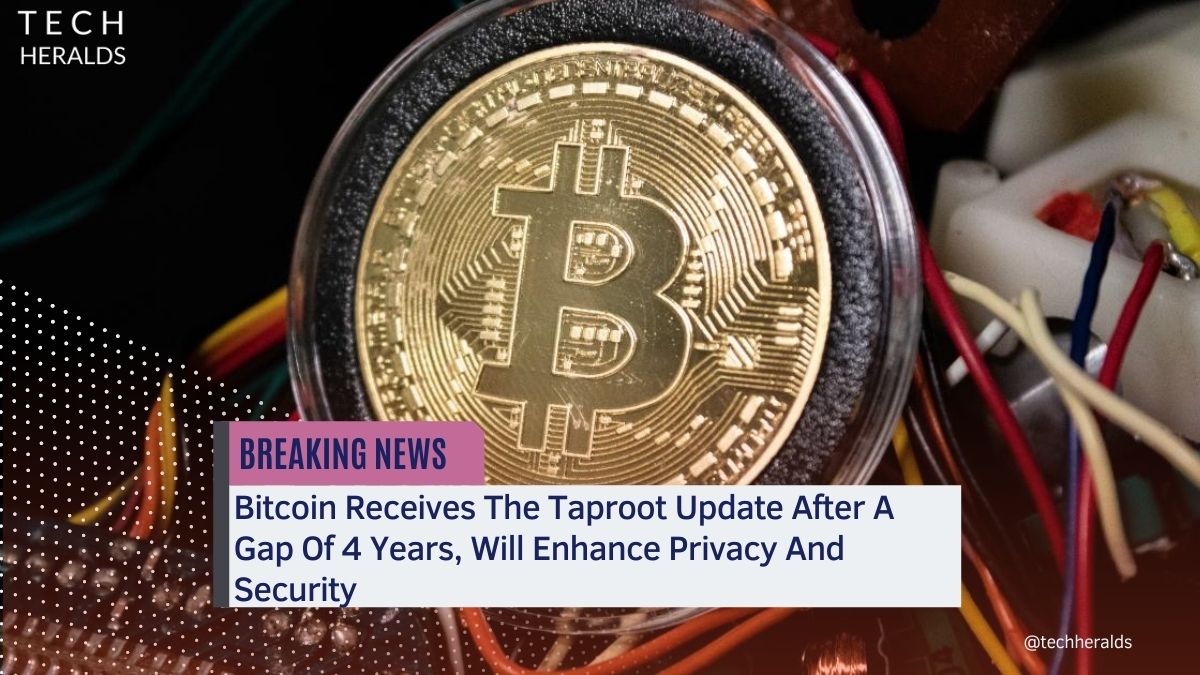 Bitcoin received a significant update called taproot update in the last four years on 14 November. The taproot update was much awaited since the news started circulating on the internet a few months ago. The update was successfully implemented on the blockchain at 10.45 am, according to the Indian time. It was a moment of joy and aspiration for bitcoin holders as the latest update will enhance Bitcoin infrastructure in many ways.

What features the Taproot update will bring for Bitcoin investors

Taproot update focuses on greater privacy and efficiency of transactions, and most importantly, it will unleash the potential of smart contracts, which will dislodge transaction middlemen.

Alyse Killeen, entrepreneur and founder of a venture capital firm called Stillmark, says the taproot update was necessary as it creates a plethora of prospects for cryptocurrency enthusiasts who want to maximize the utility of Bitcoin.

The last Bitcoin update called ‘last civil war’ was controversial as it had many glitches. Unlike the 2017 update, taproot received a warm welcome from global bitcoin investors and enthusiasts. The primary reason for this international consensus is the enhanced and sturdy script in terms of privacy and security.

What Changes The Taproot Update Will Bring In Bitcoin

The taproot update will revamp the functioning of digital signatures – a person’s fingerprint that he leaves while buying or selling bitcoins.

The existing functioning of cryptocurrency utilizes an algorithm called ‘Elliptic Curve Digital Signature Algorithm’ to produce signatures from the private key that manages the bitcoin wallet while ensuring that only the actual holder can do Bitcoin transactions.

Practically, Schnorr Signatures will improve privacy, as your private keys will not be displayed on the blockchain. So, it enables us to cover up our identity effectively, said Brandon Arvanaghi. He is a Bitcoin mining engineer and the founder of Meow – a firm that facilitates corporate treasury participation in the global cryptocurrency markets.

“Lightning transactions can be a portion of a dime… whereas a bitcoin transaction at the base protocol level can be much more expensive than that,” Killeen explained. The developers had already begun relying on Lightning, expecting the rollout of the taproot update.

As more developers are building smart contracts on the bitcoin blockchain, bitcoin can rapidly turn into a prominent player in the world of Defi, or decentralized finance, a term used to describe financial applications designed to dislodge middlemen.

Also Read: Does Cryptocurrency Mining Pose A Dreadful Threat To The Environment? Its Adverse Effects And Solutions

Why It Took 4 Years For The Taproot To Roll Out

The bitcoin investors and enthusiasts consensus agreed to the update in June. However, the taproot update took November to rollout. The delayed time frame of a few months granted sufficient time for testing and circumvented any possibility of something going wrong during the update.

“The updates give a slight scope to bug to enter the system while updating, which can shake the entire cryptocurrency system, probably devastating everything. So, the updating procedure is tested again and again. The last update to Bitcoin implemented in 2013 unexpectedly went wrong, which split the bitcoin in half.