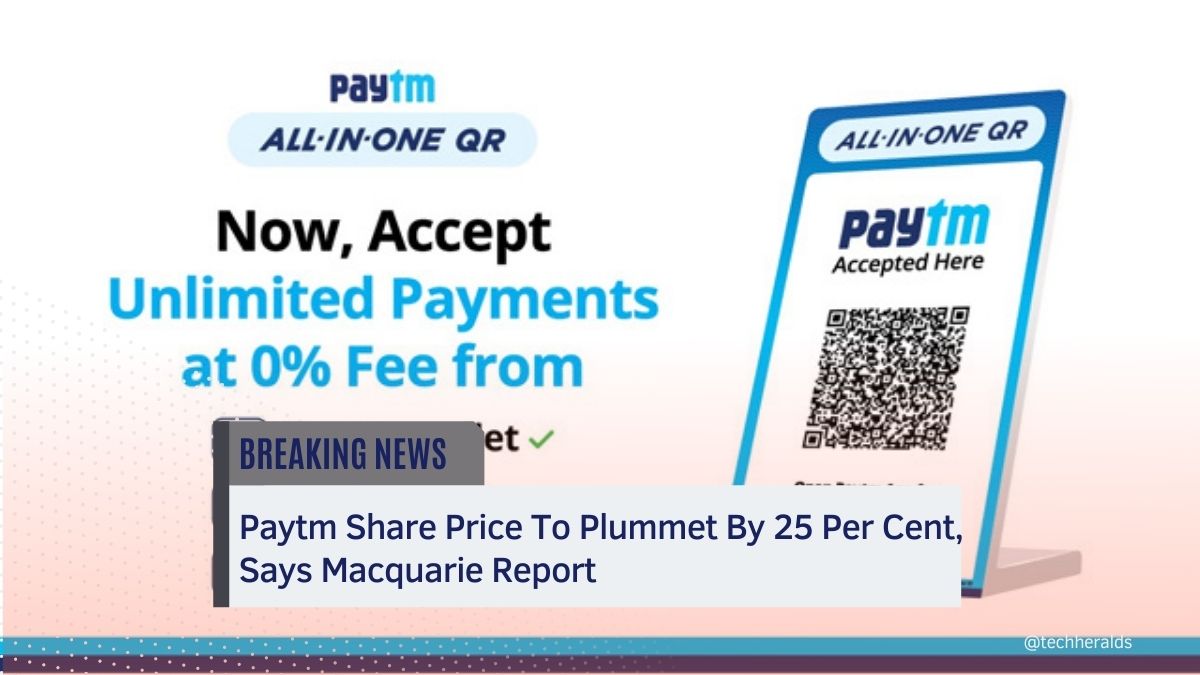 The global brokerage company Macquarie report stated tech firm PayTm share price could additionally lose 25 per cent from its existing share price. If so happened, the stock would reduce the investor’s wealth by half. Furthermore, the brokerage firm has reduced its target price for PayTm’s share to Rs 900 apiece. Macquarie had previously set the target price at Rs 1200 apiece, which is now reduced by 25 per cent to just Rs 900. However, PayTm was trading at Rs 1,173 per share.

Paytm IPO was one of the much-awaited IPOs but the tech company is showing very poor performance on the Bombay Stock Exchange and National Stock Exchange since its listing on the stock market in November month of the last year. Over time, the stock price has dropped by over 45 per cent in about three months.

According to analysts at the global brokerage Macquarie, tech firm Paytm had a target price of Rs 1,200 a share at the beginning of this year, but the analysts now expect the stock to fall by a further 25 per cent. A drop in profit estimates for the tech firm Paytm has also been made by the stockbroker. In a statement, Macquarie noted that decreased distribution and commerce/cloud revenues, largely compensated by stronger payment revenues, are pushing the company to “basically drop revenue expectations for FY21-26E on average by 10 per cent per year.” As a result of fewer sales and greater staff and software expenditures, the company’s loss predictions for fiscal year 22 have been raised by 16 to 27 per cent.

Macquarie analysts also forecast reduced revenues for commerce and, especially, distribution business given to less demand. The firm said, “Competition will impede commerce revenue growth, and the distribution business will continue to be dominated by small ticket BNPL loans, thus limiting profit potential in our opinion.”

Bumpy Future For The Tech Firm Paytm Ahead

The near future for the tech firm PayTm is predicted to be bumpy. The major reason is considered to be the latest RBI regulations related to digital payments. Paytm still earns more than 70 per cent of its revenues from the payments business. In case the Reserve Bank of India starts capping charging on the payments made through the app could badly hit PayTm’s business. Furthermore, the insurance regulatory authority IRDA turned down PayTm’s proposal to venture into the insurance business. Macquarie brokerage firm believes IRDA’s rejection could also impact Paytm”s attempt to obtain a bank license.

The global brokerage firm also raises concern over the reducing number of senior management staff at the tech firm Paytm. Macquarie firm claims PayTm senior executives are resigning from their posts, which might shadow the company’ operations if the staff continues to leave the tech firm. Also, PayTm’s permitted loan facility is as low as Rs 5,000 and will ensue lower costs than expected.

On the other hand, the optimistic viewpoints on the tech firm Paytm shares from Jp Morgan and Morgan Stanley have attempted to justify the current prices of PayTm share, while the analysts at Macquarie have labelled them as “excessively costly.” As the letter said, “the stock trades at 17 times FY23E revenues, which we feel is exorbitant.” A 25 per cent decline in Paytm’s current market price and a 58 per cent decline in the company’s initial public offering (IPO) price are suggested by the lower target price of Rs 900 a share.