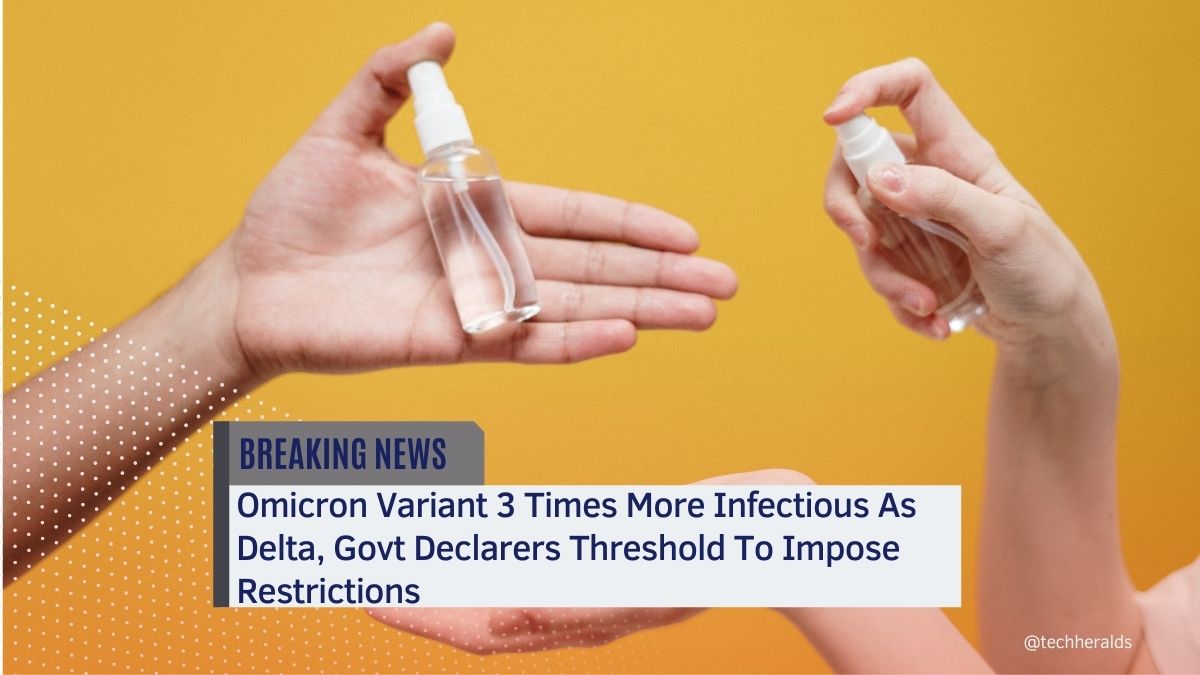 Omicron variant, the latest type of the corona has already started taking the world into its embrace. In the last few days alone, the new corona variant Omicron has shown a rapid spread in European countries. The virus is also spreading in India rapidly. Omicron has already infected about 200 people in India. Most of the patients are from Delhi and Maharashtra region.

Within three weeks, the Omicron variant of the Corona has spread across seven states of India, on which the government of India has raised concerns. The central government of India told the state governments that the Omicron variant is as transmissible as Delta. Additionally, the central government has released a list of preventive measures to curb the further spread of Omicron in the country. The list of preventions includes measures such as night curfew, limitations on social gatherings and broadening of vaccination drive across the country.

The Central government has asked the state and union territory authorities to get ready to prevent the unforeseen outbreak as the country has gone through earlier this year.

According to a letter sent to the health departments of the states and union territories by Union Health Secretary Rajesh Bhushan, “even more awareness, data analysis, proactive decision making, and strong and immediate containment strategies are recommended at the local as well as district levels.” The letter further made clear that the previous variant of Corona called Delta is still active in the country.

Also Read: Diabetes is not caused by sugar intake alone

Rajesh Bhushan, through his letter to the health departments, has set a threshold limit to being imposing restrictions. According to the threshold limits, states and union territories should impose restrictions if the rate of new cases crosses by 10 per cent or more in a timeframe of a week or 40 per cent of the oxygen or ICU bed gets occupied.

Given the rapid spread of the Omicron variant of Covid-19 in India, Rajesh Bhushan allowed the union territories and states to implement the restrictions and containment measures even before exceeding the threshold set to impose the restrictions.

The War Rooms/EOCs (Emergency Operations Centers) should be launched, and they should keep on going to examine any trends and surges, regardless of how tiny, and to take preventative action at the district and local levels, Rajesh Bhushan suggested.

The central government is insisting on expediting the vaccination drive to fully vaccinate the remaining eligible people. More than 88 per cent of the Indian residents have been totally vaccinated against Covid-19, and the central government want to push the number even further to make people immune against the Omicron virus. The government is also planning to initiate door-to-door cases searches and contact tracing of corona patients. Additionally, it has made upfront financial arrangements to expand medical infrastructure, which includes extra beds, ambulances, oxygen and other equipment.

The Omicron variant of Corona was first found in southern Africa in November month. The experts believe Omicron has a higher transmission rate. However, they are not yet sure if the latest variant of covid-19 has lesser or more severity than the previous variants of Corona. Most of the Omicron cases were found at the international airports in India that brought locals and foreigners to India from African countries and United Kingdom.

Keep following Tech Heralds for the latest updates about Omicron!