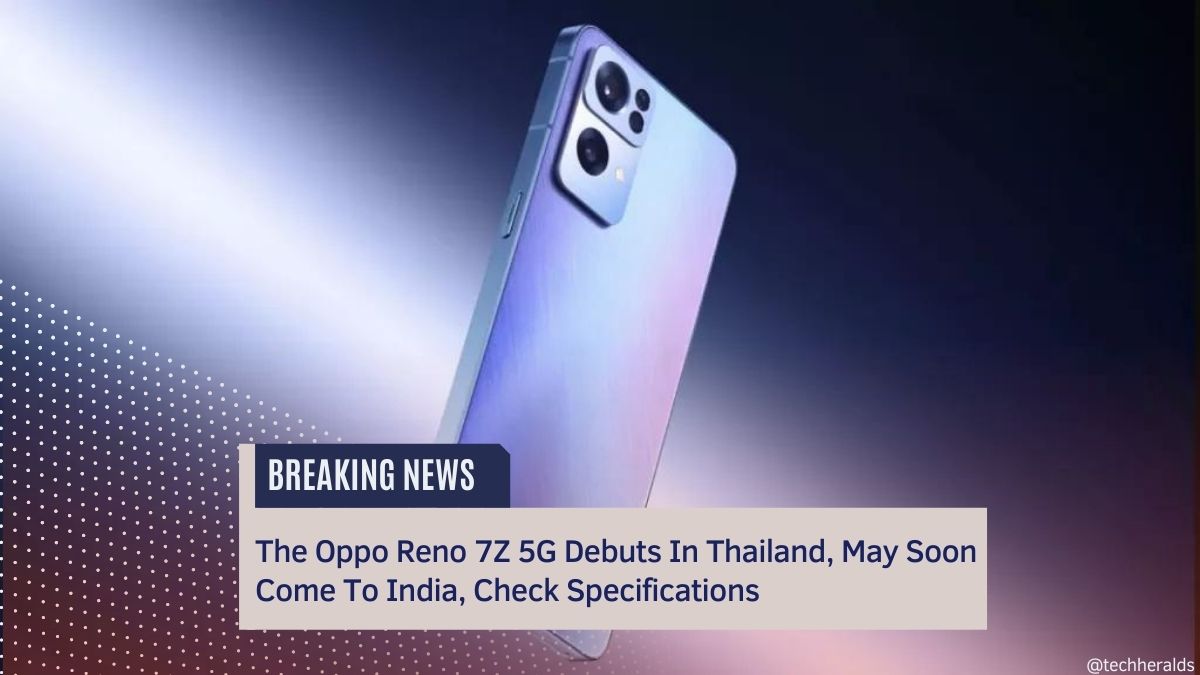 Oppo is back with the Reno 7Z 5G, which is the successor to last year’s Reno 6Z, but it has only been made available in Thailand for the time being. Both devices are at the mid-range of their respective price segments, but they have a lot in common. The Reno 7 SE 5G model is the latest addition to the line, including the base model, a Pro edition, and a Reno 7 SE. Oppo Reno 7 and Oppo Reno 7 Pro are the only models available in India from Oppo. The Reno 7 series starts at Rs 28,999 in India.

While the Reno 7Z features the same 6.43-inch AMOLED display with 1080p resolution as the vanilla Reno 7, the refresh rate has been reduced from 90Hz to 60Hz, compared to the vanilla Reno 7. The maximum brightness is barely 600 nits, and the bottom bezel is much thicker than the rest of the device.

This will be the first phone in the Reno 7 series equipped with a Qualcomm Snapdragon CPU, while a MediaTek Dimensity chipset powered the previous two devices. The design images of the smartphone were previously leaked in the middle of February, giving us a good idea of what the device would look like when it is released.

The most eye-catching feature of the Oppo Reno 7Z 5G is the Dual Orbit Lights on the smartphone’s rear. These lights are strategically positioned around the cameras and are illuminated by messages or charging. The tech company calls it Dual Orbit Lights.

The smartphone has a 6.43-inch AMOLED screen that refreshes at 60 frames per second, and it also has a punch hole in the top-left corner of the screen that houses a 16MP front camera. The Oppo Reno7Z 5G runs on Android 12, with Color OS 12 layered on top of it. A Qualcomm Snapdragon 695 CPU powers it, and it comes with up to 8GB of RAM and up to 128GB of internal storage space. In addition, this device can virtually increase its RAM capacity by 5GB, according to Oppo. It offers users the option of expanding their storage space by up to 1TB with a dedicated microSD card slot.

The primary camera on the Oppo Reno7Z 5G has also been downgraded from the vanilla model. It features the same 64MP primary sensor as the vanilla model but does not have an 8MP ultrawide lens like its vanilla counterpart. Instead, it features a 2MP macro camera and a 2MP monochrome camera. This phone can capture video in 4K resolution.

The Oppo Reno 7Z 5G features a smooth matte rear finish with an integrated side-mounted fingerprint scanner, a 3.5mm headphone socket, USB-C, and a 4,500mAh battery with 33W charging. According to Oppo, the included 33W adapter can fill this battery from flat to 31 percent capacity in 15 minutes and from flat to 100 percent capacity in 63 minutes. In addition, the details on the pricing and availability are still being worked out.