The Realme Narzo 50A Prime Launched In India 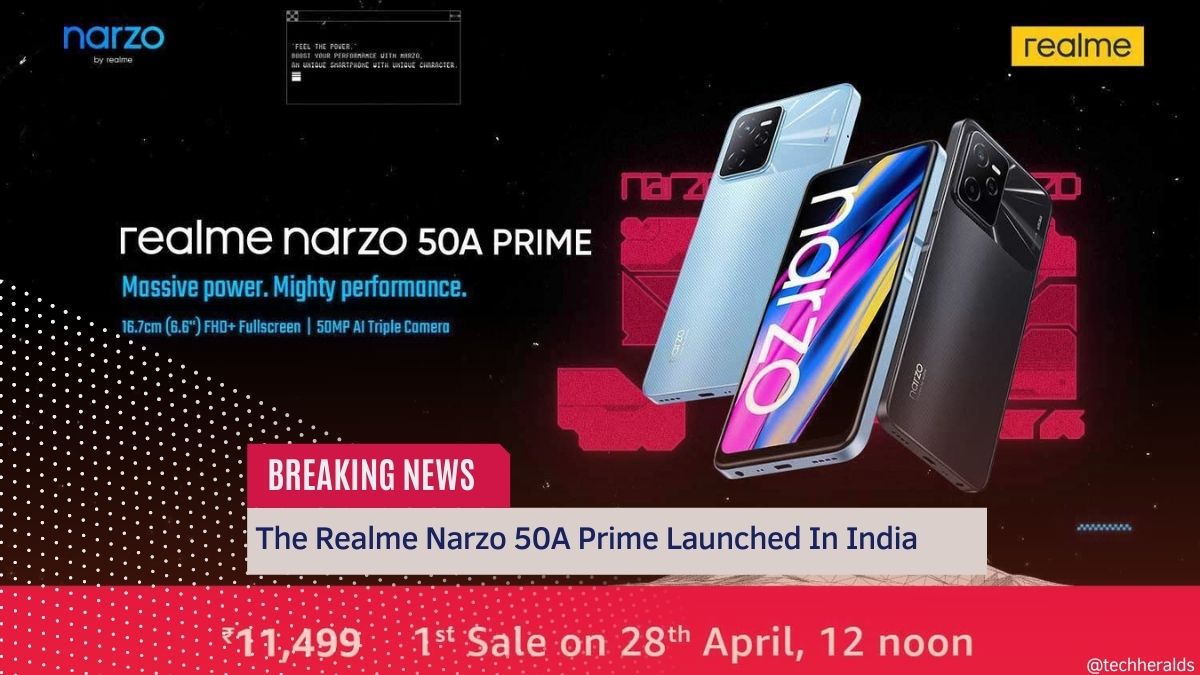 Realme Narzo 50A Prime belongs to the mid-range category priced under INR 12,000. For this price, you will get a smartphone with a triple-rear camera setup with a total resolution of 50MP. The phone runs on the latest Unisoc T612 chipset and features a 5,000mAh battery.

The Unisoc T612 chipset was developed by MediaTek, an arm of Taiwanese semiconductor manufacturer MediaTek Incorporated. Let’s have a look at the detailed specifications.

The Realme Narzo 50A Prime Specifications

The Realme Narzo 50A Prime is a slightly modified or downgraded version of the Realme Narzo 50A. The upcoming 4G phone has a 6.6-inch smartphone with a Full HD+ display and 2408 x 1080 pixels resolution. The display has a touch sampling rate of 180Hz and a peak brightness of 600 nits, and a fingerprint sensor deployed on the phone’s backside.

Also Read: The Moto G52 Launching In India On April 25

It’s powered by the Unisoc T612 CPU, 4GB of RAM, and up to 128GB of storage space. The SoC is mated with ARM Mali-G57 Graphics Processing Unit.

The phone includes three rear sensors in terms of cameras: a 50-megapixel primary sensor, a B&W sensor, and a macro lens. It also includes an 8-megapixel selfie camera on the front.

The Narzo 50A Prime is powered by a 5,000mAh battery that can be recharged using an 18W charger. It’s available in two color options: Flash Blue and Flash Black.

In terms of connectivity, the Realme Narzo 50A Prime supports 4G VoLTE out of the box and comes equipped with a USB Type-C port for charging and data transfer.

The Will Ship Without A Charger

With its ‘Double Zero’ sustainability goals, Realme aims to achieve zero carbon emissions in its corporate operations and zero trash to landfills by 2025.

Realme claims that users are increasingly adopting sustainable choices in their everyday lives and advocating sustainable living. They want to support these practices by providing the Narzo 50A Prime without a charger.

In a statement, Realme also claimed that the charger’s omission allowed them to “incorporate major improvements to the Narzo 50A Prime in terms of CPU performance, screen quality, and other areas while retaining a competitive pricing.”

The Realme Narzo 50A Prime comes in a single configuration with 4GB of RAM and 128GB of storage. Realme has priced the upcoming 4G phone at Rs 11,499. The gadget will be available for purchase in India starting at 12 p.m. on April 28 via Realme.com and Amazon India.