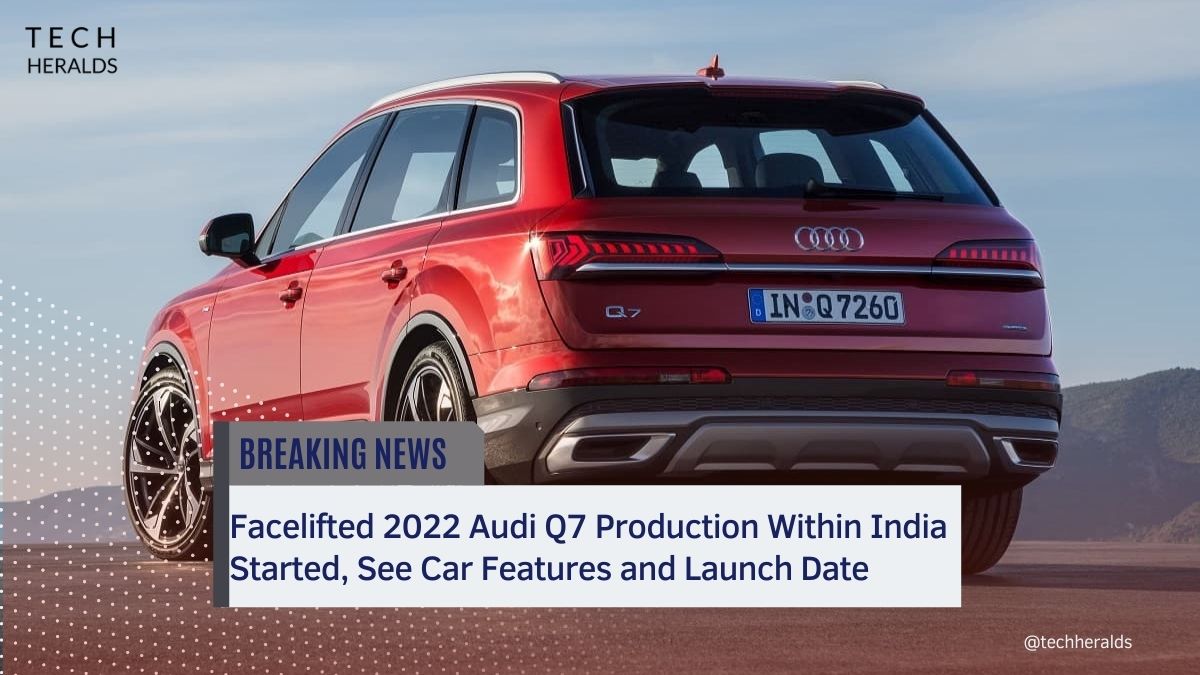 Audi India has announced that it had started the local production of its 2022 Audi Q7 at the SAVWIPL (Skoda Auto Volkswagen India Private Limited) plant situated in the Aurangabad city of Maharashtra. Audi is resuming the production of the 2022 facelifted Audi Q7 after it discontinued the previous variant of Q7 in April 2021, given the changed pollution control regulations and the implementation of BSVI norms.

2022 variant of Audi Q7 is expected to be available on sale anytime in the first month of 2022. The upcoming variant of Audi A7 will be only available in the petrol version, while the discontinued in April Audi Q7 was available in both petrol and diesel options. Audi, a German car manufacturing company, has been advocating electric vehicles to curb pollution since last year. However, Audi chose to retain the traditional form of fuel – crude oil.

Also Read: Audi A4 Premium Launched As The Lowest Model In A4 Lineup At Rs 39.99 Lakh, Also See Rivals

2022 Audi Q7 ranks second on the company’s SUV (Super Utility Vehicle) lineup after Audi Q8, which entitles the first position. Audi Q8 was launched in January 2020 at the starting price of Rs 98.98 Lakh. The top model of Audi Q8 called RS Q8 is priced at Rs 2.08 Crore and comes with Turbo Petrol Engine.

Facelifted 2022 Audi Q7 will be produced in Aurangabad and the newly launched Audi Q5. According to Audi India, Audi Q5, starting at Rs 58.95 Lakh, accounted for 45 percent of India’s sales. Audi has yet to disclose the official launch date for the 2022 facelifted model of Q7.

The upcoming 2022 Audi Q7 will inherit the dimensions from its predecessor model discontinued in April 2020. The new variant of Q7 will have imposing dimensions of 5,063mm in length x 1,970mm in width x 1,741mm in height. The wheelbase of the upcoming Audi Q7, which is 2,995mm, will also be matched to that of the previous model of the car.

Audi Q7 has a new front fascia that includes an updated front grille with six vertical slates that allow a bigger space for air to pass in, MATRIX LED headlamps, and a new alloy wheel slightly lifted towards the ring. The backlights of the Audi Q7 also seem to be redesigned and houses patchy inserts. Also, the chrome finish on the window and a chrome line on the door are some of this SUV’s exterior features.

The upcoming Q7 will boast a 10.1-inch screen touch infotainment system, 12.3-inch fully digital instrument cluster, and dedicated 8.6-inch touch screen display for four weather control. Additionally, the seats of the Audi Q7 come with leather and have a memory function to save different seat settings. The cabin has ambient lighting and a panoramic sunroof.

The Q7 will follow Audi’s policy of only offering gasoline engines in India, and it will only be provided with a petrol engine. 2022 facelifted Audi Q7 will be driven by a 3.0-liter TFSI engine with 335 horsepower and 500 Newton-meters of torque. A basic all-wheel-drive system and an eight-speed automatic gearbox are among the possible transmission choices. The upcoming Audi Q7 will have a rivalry with Mercedes-Benz GLS, BMW X7, and Volvo XC90.